From citrus peel to polymers: polycarbonates and polyesters derived from limonene

The petroleum-based plastics industry deals with two major challenges: the environmental problems caused by plastic waste and the eventual depletion of petroleum resources. For instance, poly(bisphenol A carbonate) has been used for many years in the plastics industry due to its great properties such as high impact strength, toughness (Tg of 145ºC), heat resistance and high transparency and is currently being banned since it is suspicious of causing endocrine disorders. In parallel, fossil-based resources are depleting progressively. Polymer industry is thus in need for more sustainable and safe sources of raw materials.

In order to overcome this limitation, Professor Arjan Kleij and his group have developed a process to obtain polycarbonates using bio-based reagents such as limonene oxide and CO2, both renewable reagents. A similar process yielding polyesters has been developed using acid anhydrides instead of carbon dioxide in the reaction. Both processes afford materials with properties suitable for the development of coating applications among others.

The preparation of limonene-based polycarbonate is based on several synthetic steps. In a first step, poly(limonene)carbonate (PLC) is formed from limonene oxide and carbon dioxide. The resulting polymer contains a repeating unit having a pendent double bond which is epoxidized in a second step and further converted in a cyclic carbonate in a third step, thus yielding the poly(limonene)dicarbonate. The resulting PLDC products exhibits an unusually high glass transition temperature, which makes it suitable for certain applications, such as coating applications. The method performs the synthesis of the PLDC from limonene by sequential epoxidation/carboxylation of the limonene. One advantage is that both isomers of limonene oxide are reactive in the ring-opening polymerization leading to polylimonenecarbonate (PLC), such that there is no need to upgrade or purify commercial limonene oxide to a single diasteroisomer. Noteworthy, the pendent double bond in PLC can further be functionalized through chemical modification in order to introduce functionality to the prepared polymer. The resulting ingredients may be used in the formulation of coating applications. 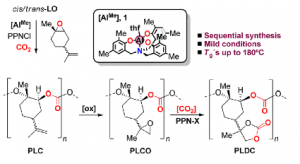 In a similar manner, the preparation of polyesters from limonene can be performed by ring-opening copolymerization (ROCOP) in presence of various polyaromatic anhydrides. The process uses a specific catalyst allowing the formation of a polymer with a narrow index of polydispersity than the catalysts described in the state of the art. The developed process affords high conversion of anhydride, leading to high molecular weight polymers with reasonable indexes of polydispersity. Last but not least, the prepared polyesters benefit from high glass transition temperatures.  The copolymerization reactions proceed with excellent selectivity toward fully alternating polyesters (≥98% ester bonds) 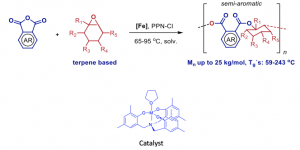 The present technology has been proven at the laboratory and the preparation of PLC has been scaled-up to the multigram scale (300 g batch).

Partner for joint development and/or commercialization of products and custom applications of the developed materials is sought.

Samples of materials are available for testing through Material Transfer Agreements.

Global licensing rights for the materials and methods are available.

Regional licensing deals may be considered.

Two US non-provisional application has been filed: