Currently, drug discovery and development are long-lasting processes with high associated costs, which has a significant impact on the price and accessibility of new marketed drugs. Furthermore, more than two-thirds of prescription drugs are chiral, with the majority of new chiral drugs being single enantiomers. A major obstacle to their discovery and development is associated with complex multi-step synthesis. In this sense, novel strategies that permit the synthesis of such drugs in a direct and efficient manner are required in order to meet the demands of the pharmaceutical industry. Late-stage C−H functionalization in the lead optimization phase has the potential to solve this problem; however, this process remains as a long-standing challenge in synthesis. That’s where this technology offers a solution.

The research group of Dr. Marcos Garcia-Suero at ICIQ is focused on the development of new catalytic C−H & C−C functionalization strategies for chemical synthesis. The group has developed a new class of reagents for the diazomethylation of (hetero)aromatic substrates through the generation of carbynes, leading to the regioselective introduction of carbenoid groups in the reaction substrate. The developed diazomethylation reagent consists in a hypervalent iodine reagent useful in the insertion of the diazocarboxylate moiety into (hetero)aromatic C-H bonds through a Ru(II) mediated photoredox process. The introduced carbenoid group can further be functionalized by modification of the diazo group and/or the ester functional group to introduce molecular diversity. 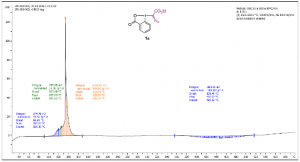 The diazomethylation reagents are hypervalent iodine compounds wherein a diazomethyl group is appended to the iodine atom. Despite the presence of the diazo group, these compounds have proven rather stable in our hands (handled at room temperature and at small scale). These reagents are suitable for the transfer of the diazomethyl group under photoredox conditions to an aromatic C-H bond with excellent regioselectivity.

The diazomethyl functional group represents a good starting point in the preparation of compounds with high molecular diversity from one sole starting material, since it acts as a carbenoid, making it suitable for applications in the discovery and development of biologically active molecules, such as agrochemicals and drugs. 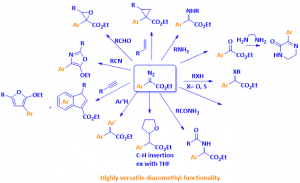 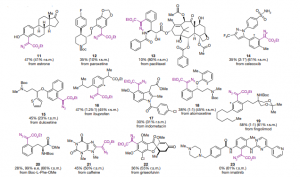 Given the innate ability of carbynes to form three new covalent bonds sequentially, Professor Marcos Garcia Suero and colleagues anticipated that a catalytic method of generating carbynes or related stabilized species would allow what they term an ‘assembly point’ disconnection approach for the construction of chiral centers.

A proof of concept has been achieved in a laboratory scale on active ingredients as substrates (functionalized molecules).

Various models of exploitation can be envisioned:

An Industrial Partner is sought for the joint development and/or commercialization of reagents in the form of a synthetic toolbox. Such a product would include diazomethylation reagents together with reagents for further molecular diversification. These kits could be sold through catalogues of R&D chemicals.

Global licensing rights for the materials and methods are available.

Regional licensing deals may be considered.

Flexible licensing strategy related to development milestones may be considered.

A patent application has been filed:

-Title of the patent: Diazomethylation reagent and process for using it