ICIQ’s first spin-off, Orchestra Scientific and the Lloret-Fillol group’s project CATSOL-AEM have been selected for the final round of the Ingenia Energy Challenge, which will be held in September 2020. For the first year, the Challenge is open to projects outside Enagás – Spain’s leading natural gas transmission company and Technical Manager of the national gas system – aiming to foster the innovative spirit within the company as well as the university, scientific, and start-up environment. The goal of the Ingenia Energy Challenge is to further the progress of a sustainable energetical landscape. Five challenges articulate the initiative: sustainable mobility, biogas/biomethane, renewable hydrogen, energy efficiency, and digitalisation in order to find new models and technologies to transition to a low carbon economy.

Both ICIQ projects have a clear commitment to a sustainable future and address more than one challenge. For instance, Orchestra Scientific is testing a new material –a metal-organic framework– selective to CO₂ molecules, that allows to separate them from a mixture of gases. “Orchestra’s membranes can be a great asset to reduce CO2 emissions and foment circular economy. They also have direct application in biomethane production, reducing its cost and promoting the use of this renewable source of energy,” explains Cristina Saénz de Pipaón, Orchestra Scientific’s CEO. 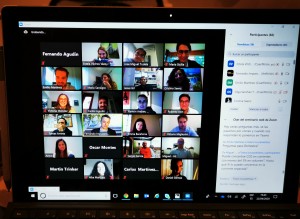 Members of the jury and semi-finalists during the intervention of Marcelino Oreja, CEO of Enagás.

Lloret’-Fillol’s group proposal focuses on developing and commercializing catalytic solutions related to the development of Anion Exchange Membrane technologies for sustainable production of hydrogen. Still in its initial stages, the project takes advantage of highly active materials that operate under mild conditions, thus promoting a new class of electrolysers – at a small scale. “We are developing electrolysers that you can plug into the electric socket at home. Then, split water and produce hydrogen. It’s quite focused on domotic applications like homes or stores, so it can reach lots of people – just like cell phones,” explains Alberto Bucci, the postdoctoral researcher from the Lloret-Fillol group who is leading the project.

The technology’s potential to improve the energetic efficiency, stability, and durability of the electrolisers has encouraged the researchers to submit a patent application to the European Patent Office on April 15th, 2020. “I’m excited about this project because it engages basic science to work on something with the potential to reach the market soon. The team is looking forward to working on this and making the technology a reality,” states Bucci. 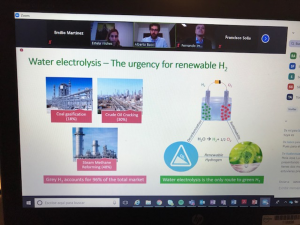 Presentation of the CATSOL-AEM project.

In competition with over 115 projects, the two ICIQ proposals have successfully passed to the final round of the Challenge issued by Enagás Emprende, Enagás’ Corporate Venturing. Now, the 11 finalists will work with the company for two months (from May to July) in co-creating and developing the proposals that will compete in the final round. “What I appreciate is that aside from the Enagás economical support to the winning project, they are committed to accompanying the development through mentoring, training, input, etc,” states the postdoctoral researcher.

The ICIQ teams learnt about the Ingenia Energy Challenge after the visit of Estela Vilches, Director of Enagás Emprende, to ICIQ in February to give a seminar. The invitation was extended by the institute’s Knowledge and Technology Transfer Unit, “it has proved to be a very fruitful invitation as it allowed our researchers and Enagás to get to know each other better,” explains Frédéric Ratel, manager of ICIQ’s Industrial Property Unit. “I’m grateful for all the support received from KTT and proud for having reached this stage, considering it’s something we’ve developed during the lockdown!” exclaims Bucci.

Previous
Congratulations Dr. Karajovič!
Next
Two ICIQers win the 2020 RSEQ-Lilly Awards
This website uses cookies to facilitate user navigation. You can get more information or change the settings of your browser by clicking here. ACEPTAR