Polyoxometalates (POMs) are a prominent type of molecular metal oxides formed by a framework of transition metals (e.g., Mo, W, V, Nb, Ta) and oxo- groups. These compounds have important applications in catalysis (water oxidation reactions), biochemistry (peptide bond breaking/forming), and energy (electrolytes in batteries). Although POMs have been applied to several systems, their aqueous speciation remains partly unknown. This is due to the complex multi-species chemical equilibria, and the effect of additional variables such as pH, concentration, ionic strength, temperature and pressure. Analogously, the self-assembly mechanism of polyoxometalates is still understudy.

In this work, we attemp to develop a method for studying the aqueous speciation and self-assembly mechanisms of POMs. This method must consider key experimental variables, as well as the complex equilibria between all the species.

Firstly, we employ Density Functional Theory (DFT) to optimize the geometries of the molecular structures, and compute the thermochemical energies. Then, we convert molecules to molecular graphs and we take advantage of the isomorphism property to construct a chemical reaction network in an automated manner. Next, we set up speciation models with the chemical reactions found in the previous step. We solve the speciation models to obtain the theoretical formation constants. The final step consists in performing a linear scaling of the theoretical constants so they reproduce the experimental data. Regarding the mechanism, we assume that the reactions from the most accurate speciation model will describe the self-assembly mechanism.

In this thesis we have developed POMSimulator, a computational method for predicting the aqueous speciation and self-assembly mechanism of polyoxometalates. We apply this method to five families of isopolyoxometalates: molybdates, tungstates, vanadates, niobates, and tantalates. Finally, we found that the slope parameter of the linear scaling was constant (~0.3) for the five studied systems. We believe there might be a possible universal scaling for the theoretical constants which could expand the applicability of the whole method. 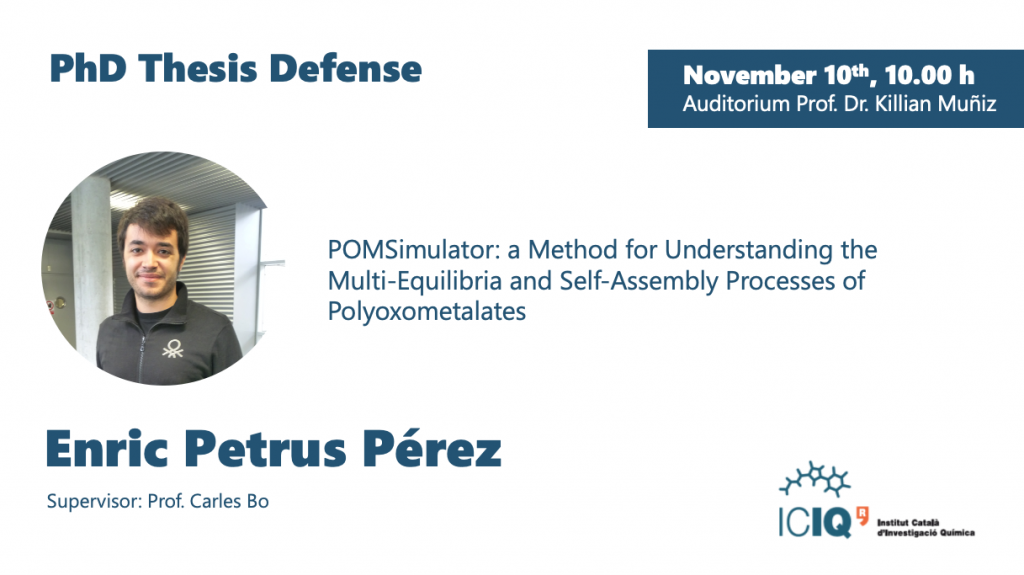