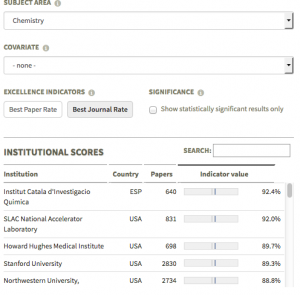 In its fourth release, the web application Mapping Scientific Excellence ranks ICIQ in first position in “Best Journal Rate” (ratio of papers published in the most influential journals) and third in “Best Paper Rate” (proportion of highly cited papers published by an institution) in the field of Chemistry worldwide.

These results refer to the 2011-2015 time period and to research centers and universities with at least 500 papers published. In the third release for the 2007-2011 time period, the institute ranked second in “Best Journal Rate” and third in “Best Paper Rate.”

Previous
Rubén Martín wins the Banc Sabadell Foundation Prize for Sciences and Engineering
Next
We welcome the Summer Fellows 2018!
This website uses cookies to facilitate user navigation. You can get more information or change the settings of your browser by clicking here. ACEPTAR