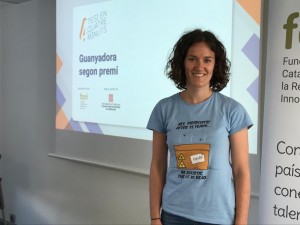 In the final round of the contest “Presenta la teva tesi en 4 minuts”, held on June 25th, Bruna Sánchez, PhD student in the Maseras group, won the second prize, endowed with a 2000€ award. Eleven  doctoral students from eleven different universities in Catalonia took part in the competition. You can watch the entire final on the FCRI Foundation’s YouTube channel.

Sánchez delivered a monologue on computational chemistry and the differences and similarities between mechanochemical reactions and classical chemistry. Previously, she won the URV off shot of this contest that secured her a place in its final round.

Previous
Feliu Maseras lectures the chemical sector on Digital Immersion
Next
AiCuris and ICIQ increase their collaboration by setting up a Joint Unit
This website uses cookies to facilitate user navigation. You can get more information or change the settings of your browser by clicking here. ACEPTAR