Juanjo Cabezas-Giménez, PhD student under the supervision of Prof. José-Ramón Galán-Mascarós and Prof. Anton Vidal (UB), has defended his PhD thesis entitled “Insights in Homochiral Metal-Organic Frameworks: From Their Synthesis to Enantioselective Applications” (assigned to the Inorganic and Physical Chemistry Department of the Universitat Rovira i Virgili) publicly on March 24th. 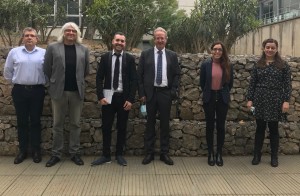 Dr. Cabezas with his thesis supervisors and the members of the evaluation committee

Dr. Cabezas-Giménez is from Badalona. In 2012, he graduated as a chemist from Universitat de Barcelona, then he spent one year as a Medicinal Chemist in GSK (Stevenage) in 2016-2017. He obtained his master’s in Organic Chemistry before joining ICIQ in 2018 for his PhD in the Galán-Mascarós & Vidal groups. During this time, he spent three months working under the supervision of Prof. David Fairén-Jiménez in University of Cambridge. Outside the lab, he enjoys spending time in nature, using his words “seas, mountains and rivers, like the Txarango song” or roaming around and exploring small towns and villages or new areas.

Because when I was 16, I had a great chemistry teacher. She was really passionate about her work, and that was contagious. She genuinely worked to make us interested in chemistry, and it worked! Even though I was still very young, I realized that I enjoyed chemistry and it actually made sense in my head, so I thought this could be a good fit for me – and I still do!

What goals do you have as a scientist?

To keep on being curious! I want to always be interested in science, if you’re a scientist you should always be curious about new advances and keep on learning.

To have a good work environment. Although working in science can be very competitive, you need to understand that you don’t work alone, and you should be able to count on your colleagues for help – for sure at a professional level, but also on a personal one. Learn all you can from the people that surround you, that’s how you’ll make the most from your PhD.

The summer dinner and Xmas lunches! It was great, gathering together and enjoying each other’s company. I will also miss going to the Research Support Area and talking to the technicians, I always learnt a lot from them!

What would you say to someone who is now beginning their PhD?

You need to be excited about what you are doing. Also, don’t be too confident because science is frustrating and you need to know how to tolerate it. At the end of the day, you will try out many different things and not all of them will work out, so it’s important to have that in mind. Finally, you don’t work alone in the lab, you are part of a scientific ecosystem so you need to learn to navigate that.

I have been working at Laboratoris Esteve doing quality control, but in a couple of weeks, I’ll start a new position at Hipra, where I’ll work as an R&D Researcher in Formulation and Analysis.

From your experience at ICIQ, what do you think we can improve?

I wish the groups at ICIQ would collaborate more with each other. My feeling is that the research groups are “fragmented”, there are brilliant people working here, and if we joined forces, I’m sure both the quality and the outcomes of research would be positively impacted.

What do you enjoy the most about working as a scientist?

Letting your mind wander, you need to be extremely creative to make sense of the things you are doing in the lab. In science, imagination is so important.

Do you have a favourite molecule?

Limonene, because it smells nice and I did a great job once when I had to separate the two enantiomers.

If you were to become an instrument, what would you be?

An HPLC because it works well under pressure! It’s such a useful instrument, and if you learn to use it properly, you can make the most out of it.

Tell us something about you that we might not know… I’m 28 but I still play Pokémon!

Previous
ICIQ alumnus Pere Miró awarded with a NSF Career Award
Next
ICIQ participates in Inspira STEAM
This website uses cookies to facilitate user navigation. You can get more information or change the settings of your browser by clicking here. ACEPTAR