Ana Bahamonde, PhD student under the supervision of Prof. Paolo Melchiorre (ICIQ), has defended her PhD Thesis entitled
“Development and Mechanistic Understanding of Photochemical Reactions” (assigned to the Organic and Analytical Chemistry Department of the Universitat Rovira i Virgili) publicly on June 15th at the ICIQ Auditorium. 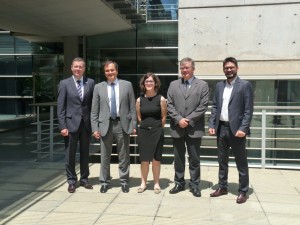 Dr. Bahamonde with her supervisor, Prof. Paolo Melchiorre, and the evaluation committee

The doctoral thesis of Ana Bahamonde describes the development and mechanistic understanding of photochemical organocatalytic reactions. Initially, she focused on designing new chemical transformations that relied on the formation of electron-donor acceptor (EDA) complexes. Specifically,  an enamine-mediated enantioselective photochemical α-alkylation of ketones with electron-poor alkyl bromides was the developed. Subsequently, this EDA complex-mediated strategy was expanded to the photochemical alkylation of indoles with electron-poor alkyl bromides.

The second part of her PhD work was characterized by a progressive transition from reaction development towards a mechanistically-oriented approach. In particular, she focused on detailed mechanistic studies of some photochemical enantioselective transformations previously developed in the Melchiorre group. They studied the mechanism of the enamine-mediated photochemical α-alkylation of aldehydes. Quantum yield measurements revealed that a radical chain mechanism was operative. Moreover, kinetic studies established the trapping of the carbon-centered radical by the enamine, to form the carbon-carbon bond, as the turnover-limiting step. Additionally, the turnover-limiting step of the iminium ion-mediated radical conjugate addition to β,β-disubstituted cyclic enones which had been previously developed by the group was uncovered.

Previous
New Doctor at ICIQ!
Next
ICIQ at the 36th RSEQ Biennial Meeting
This website uses cookies to facilitate user navigation. You can get more information or change the settings of your browser by clicking here. ACEPTAR