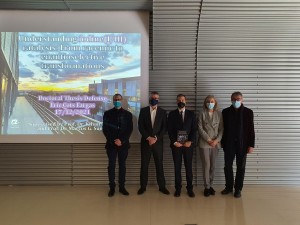 Dr. Cots with his thesis supervisor & the members of the evaluation committee

Dr. Cots is from Manresa, did his bachelor’s in Chemistry at the Chemical Institute of Sarrià (IQS) and moved to the University of Barcelona for his master’s before joining the Muñiz group at ICIQ for his PhD in 2017. Aside from chemistry, he likes music and together with his best friend he created his first band when he was a teenager. Now, he is part of three bands: a metal one, a pop one, and a third one with people from ICIQ where they play indie rock.

Why did you decide to become a scientist?

The first time I took chemistry and physics lessons I decided I wanted to become a scientist. I didn’t have an epiphany, but I realized that I really liked those subjects, and so decided to pursue this path. When you are young you want to change the world, and science is the best way to do so. I’ve always thought that science, and especially chemistry, has many different applications that can help society.

What triggered your interest in Iodine (I/III) catalysis?

I wanted to do catalysis because I believe it’s a powerful tool that can be applied to many different topics. The catalysis I’ve been developing, Iodine (I/III) catalysis, has many different applications, mainly being able to synthesise molecules that right now are out of our reach, or to synthesise them in a more environmentally friendly way, without using heavy metals, reusing the catalyst, etc. I hope that in the future we’ll be able to find even better applications for it.

That knowledge isn’t written in stone, it’s fluid. Eventually, we will discover new things that will make us change our outlook on a topic. This is something that I have realised during my thesis because I started working on topics that were supposed to be well known but we actually changed the understanding of them. We need to remember that science is not static and that our duty as researchers is to make it advance, which will, in turn, change how we think.

What do you wish you’d known at the beginning of your PhD?

That achieving anything is much more difficult than you first think. Sometimes it’s not even a matter of effort or hard work, because some things are outside of your control. To those starting now a PhD, I’d tell them to be patient, because things take time to work. Also, learn to work in a team, don’t be afraid to ask questions to your lab mates and supervisor, and remember to take time off to rest and take care of yourself.

I’ll work as a postdoc at the Marcos Garcia Suero group.

Favourite molecule: DNA because it’s the blueprint for life

Piece of lab equipment: a Dewar because it’s as noisy as me – I talk constantly!

Tell us something about you that we might not know: I’ve tried over 1500 beers – I have an App on my phone to keep track of them all!