Raúl Martín, PhD student under the supervision of Prof. Ruben Martin (ICIQ), has defended his PhD thesis entitled “Functionalization of Strong Sigma Bonds by Nickel and Tungsten Catalysis” (assigned to the Analytical and Organic Chemistry Department of the Universitat Rovira i Virgili) publicly on January 15th. 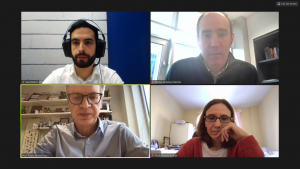 Dr. Martín with the members of the evaluation committee

Dr. Martín is from Fuenlabrada, a city near Madrid (Spain). In 2014 he obtained his degree in Chemistry from the Universidad Complutense de Madrid and, one year later, his master’s degree in Organic Chemistry. Thanks to a La Caixa Severo Ochoa grant he did his PhD at ICIQ. He likes playing videogames and paddle, HIIT training sessions, and throwing parties.

I studied science because from a young age I felt the need to help others. Over the years, I have realized that a feasible way to do it was by discovering everything unknown, which would eventually reflect on a better life for people.

Everything I learnt doing outreach. I think the Bojos per la Química programme is incredible, its activities allow you to share your knowledge as well as values ​​ with the younger generations. I also feel the ICIQ Graduate Student Programme helps you realize the complex world in which we live, and think about how you want to face your doctorate.

After four years, there are many moments. But the ones that will stick forever are those when I was at my worst and the people around helped me get through. What I will miss the most, of course, is the people.

I wish I had known more clearly that everything is a process. My advice is to surround yourself with the best possible team and don’t be afraid to learn from people who know more than you.

I would like to start working in industry. For example, in the sustainable energy, pharma or applied chemistry fields.

A gas chromatographer–mass spectrometer (GC-MS), to be able to see all the discoveries that are made serendipitously but that we are not able to see.

Previous
Вітаємо, Dr. Vereshchuk!
Next
Moltes Felicitats, Dr. Mayans!
This website uses cookies to facilitate user navigation. You can get more information or change the settings of your browser by clicking here. ACEPTAR