Scientists from the Lloret-Fillol group at ICIQ present a new approach for the cyclization of unactivated alkyl chlorides with tethered alkenes. By combining the catalytic power of a visible-light photoredox catalyst with a coordination Ni complex, the scientists have been able to in situ activate otherwise challenging bonds. Miguel Claros, first author of the paper, published in Angewandte Chemie International Edition, shares the story behind it.

For the first time, we’ve been able to activate C(sp3)-Cl bonds using light as an energetic source. This was achieved by combining two catalysts: a Cu-based photocatalyst, able of absorbing light and transferring the energy to the second catalyst a coordination Ni complex – designed by the group. Together, they behave as supernucleophiles and are capable of activating strong C(sp3)-Cl bonds under visible-light irradiation. Once the bond breaks, the organic species unites with the metal and the Cl goes its own way. Later, the organic radical generated from the organometallic species attacks the alkene, generating the cycle. Now, we’re able to cyclize alkenes to form 5C cycles with broad functional group tolerance at mild reaction conditions. 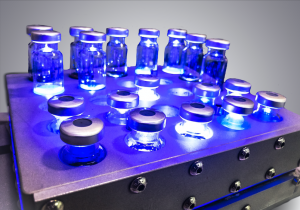 We want to adapt a similar methodology to cyclize alkynes. After the first functionalization, we’d have a remaining double bond able to be functionalized again. In this case, it would be done in two steps instead of one – we’ll try to include 6C cycles and hetero-couplings, create cycles from different molecules, expand to cross-coupling reactions and even to activate more challenging substrates like those containing C(sp3)-F bonds

Usually, 5C cycles were made using I or Br, but those bonds are expensive. But Alkyl Chlorides are way more abundant and cheaper, and stable. Now, thanks to this methodology they are as easily activated as the functionalized with the I or Br but only at our wish, which could be very useful for late state functionalization of bioactive molecules.

Previous
Professor Alfredo Pérez Rubalcaba, in memoriam
Next
NOAH training school
This website uses cookies to facilitate user navigation. You can get more information or change the settings of your browser by clicking here. ACEPTAR