Researchers from ICIQ’s Lopez group unravel key molecular interactions involved in the electrocatalytic production of ammonia (NH3) from nitrogen (N2). The ICIQ scientists have been able to model a realistic representation of the catalyst–solvent interface at the Density Functional Theory (DFT) level to understand the role of ionic liquids in ammonia synthesis. Manuel A. Ortuño, first author of the manuscript published in The Journal of Physical Chemistry Letters, shares the story behind it.

The current challenge in the electrocatalytic synthesis of ammonia through the nitrogen reduction reaction (NRR) is selectivity. The overall efficiency of the process decreases due to a competing side reaction that produces hydrogen, the hydrogen evolution reaction (HER). Recent experiments report that by using mild conditions and ionic liquids formed by pairs of cations and fluorinated anions the reaction is selective towards the synthesis of ammonia. Here, we seek to understand how the NRR reaction works and pinpoint the factors that control the selectivity of the process.

Together with our collaborators from University of Bonn, and thanks to the computer resources provided by HPC-Europa3, we simulated a realistic catalyst–solvent model of over 500 atoms to explore the mechanisms of NRR and HER with a metal catalyst. We found that, while the bare metal favours the production of hydrogen, the presence of fluorinated ionic liquid stabilizes key intermediates in NRR, thus driving the reaction towards ammonia production. These features explain the experimental results and could only have been captured by modelling the solvent explicitly. 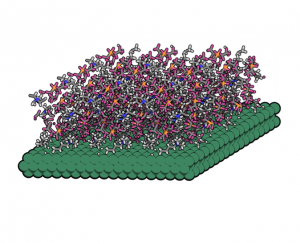 Our computations demonstrate how the fluorine atoms of the anions which form the ionic liquid as well as the local electric fields created by the ion pairs play a key role in setting up the conditions to favour NRR over HER. To guide the design of new catalytic systems, we first need to develop descriptors that will allow us to predict whether a particular ionic liquid will facilitate the reaction or not. Finding easy-to-compute magnitudes for such complex systems is a crucial step to rapidly screen libraries of compounds and propose new candidates to experimentalists in a timely manner.

Ammonia synthesis is the chemical process that feeds the world as it is the main source of fertilizers. Massively obtained through the Haber–Bosch process, the production of ammonia alone is responsible for almost 2% of CO2 emissions and 1% of the energy consumption worldwide due to the harsh temperature and pressure conditions needed for the reaction to occur. As a result, there is a global race to find an alternative electrocatalytic approach that would reduce such high energy demands.

Previous
New doctor at ICIQ: Dr. García-Morales
Next
Urakawa and Kleij selected as Outstanding Reviewers by journals of the Royal Society of Chemistry
This website uses cookies to facilitate user navigation. You can get more information or change the settings of your browser by clicking here. ACEPTAR