Enric Petrus, PhD student under the supervision of Prof. Carles Bo (ICIQ), has defended his PhD thesis entitled “POMSimulator: a Method for Understanding the Multi-Equilibria and Self-Assembly Processes of Polyoxometalates” (assigned to the Inorganic and Physical Chemistry Department of the Universitat Rovira i Virgili) publicly on November 10th. 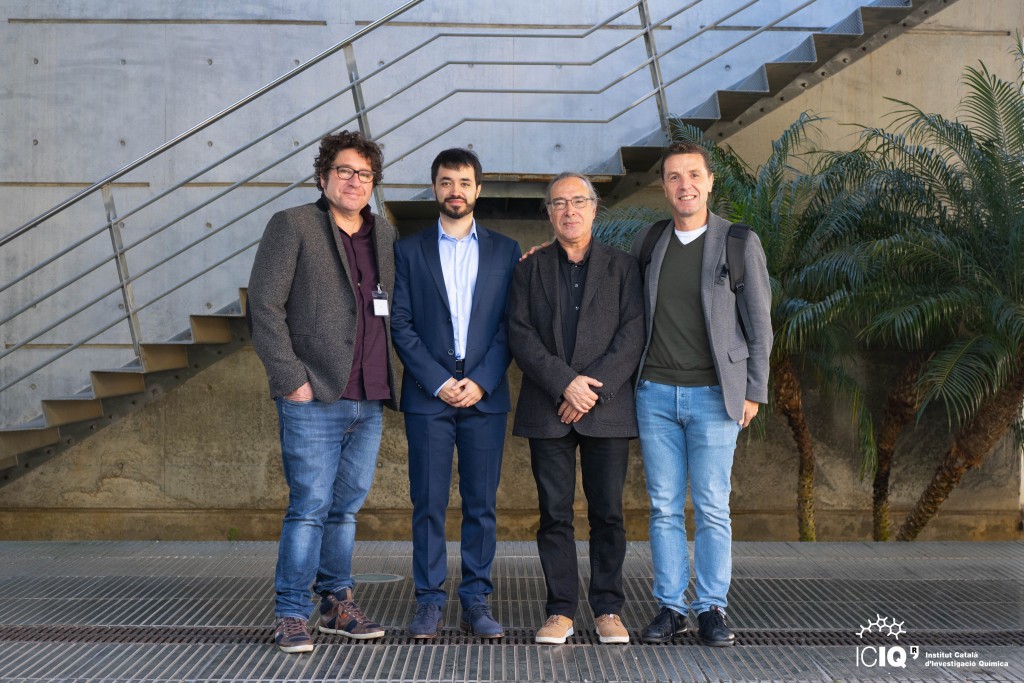 Dr. Petrus with his thesis supervisor and the members of the evaluation committee

Dr. Enric Petrus was born in Barcelona but he spent most of his life in Cambrils, a small city near Tarragona. He obtained his bachelor’s degree in Chemistry and a master in Catalysis, Synthesis and Molecular Design, both obtained at Rovira i Virgili University (Tarragona). His favorite hobby is chess. He enjoys playing weekend tournaments and reading books from the greatest players, as well as skiing and spending time with his friends and family.

I became a scientist because I was (and still am) a curious person. Also, my parents are biologists so I was somewhat close to science since my childhood.

What do you want to achieve as a scientist?

I would like to provide software that can be potentially useful for developing new technologies.

My thesis is about developing a method for describing the solution chemistry of molecular metal-oxo clusters (aka, polyoxometalates) computationally. We named this method POMSimulator as it predicts the aqueous speciation and reaction mechanisms of polyoxometalates.

What triggered your interest for the subject of your thesis?

The mathematical and computer programming complexity. I had to strengthen my coding skills as well as my understanding of algebra, calculus and Graph theory.

What applications can your thesis have in the future?

POMSimulator can have a potential application in assessing and predicting the behavior of metal-oxo compounds in solution. This aspect is very relevant in fields such as energy materials (batteries) and biochemistry (medicine).

The thing that I like most about my thesis is….

The surprisingly good linear relationships that we found between theoretical and experimental equilibrium constants. I still remember when I saw for the first time the high coefficient correlations and low standard deviation errors of thousands of simulations. I spent a week double-checking the code to make sure that it was not an error.

From the lessons learnt (or skills developed) at ICIQ, which one do you value the most?

It is hard to pinpoint only one lesson. Nonetheless, I would say that computer programming skill is the most valuable one.

I clearly remember the talk that Ben Feringa gave at ICIQ in 2019. It was the first time that I saw a scientist with a Nobel Prize.

The good atmosphere in the computational office. The fact that three computational groups share the same space generates a very dynamic and cheerful environment.

I wish I had been more mindful with the scientific literature. In my third and fourth year as a PhD student I benefited a lot from reading articles related to my topic. In the end, the more you read, the more learn.

Be resilient and do not lose perspective. Science (as life) is not a linear pathway so it is important to keep on moving forward even if the circumstances are not always favorable.

From your experience at ICIQ, what do you think we can improve?

Due to COVID-19, the breakfast gathering in the canteen is no longer the same as it used to be. I really enjoyed having a coffee there with colleagues from other research groups.

Have you ever been emotional over an experiment/simulation? Why?

No, I have not. I rather stay even-temperate regardless of the outcome of the simulations. I can relate this to my interest in Buddhism and its insightful way of approaching life.

Who/What has been your biggest influence/motivation?

Due to the circumstances and my background, I was rather influenced by the success of the Deep Mind company in the past decade. Their breakthroughs in game theory (AlphaGo) and more recently in protein folding (AlphaFold) were very inspiring.

I would like to at least perform a postdoc, but time will tell.

is it challenging and has a straightforward application to real life.

What is your favorite molecule?

The tri(ethylenediamine)nickel(II) because of two reasons: (i) its unusual symmetric point group, a D3 (ii) because I synthesized it in my bachelor and for some reason I still keep the small glass flask with its purple powder in my car.

I would be a Motherboard as it holds and allows communication between many other components; an important skill transferable to other disciplines.

Tell us something about you that people might not know…

I played the saxophone (alto) for more than ten years. At present, I do not play it frequently but I hope that in the future I will find time for it.

Previous
Un unprecedent hunt: Molecules with memory at room temperature
Next
Dr. Casadevall, ICIQ’s new Junior Leader ”La Caixa”
This website uses cookies to facilitate user navigation. You can get more information or change the settings of your browser by clicking here. ACEPTAR