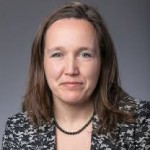 Bibiana Campos Seijo is an editor, publisher, and media executive currently working as the Editor-in-Chief of Chemical & Engineering News. Originally from Galicia, Spain, she studied chemistry at the University of Santiago de Compostela and then moved to Manchester Metropolitan University in the UK to pursue her PhD. Campos Seijo began her publishing career in the UK – where she lived for 17 years – as a technical editor at the European Respiratory Society. In 2009, she became Editor-in-Chief of Chemistry World, the monthly news magazine published by the Royal Society of Chemistry and in December 2014 joined C&EN as Editor-in-Chief.

How did you decide to become a scientist and why?

I studied science because of my secondary school math and science teachers: they were wonderful as people and as professionals. And they were excellent storytellers: I remember how they would enter the classroom and just awe us with everything they knew, they were outstanding! A large proportion of my classmates pursued scientific studies after high school and I’m convinced our teachers were the reason.

How did you transition into Science Communication?

When I finished my PhD, I started working as a part time lecturer, but I already knew that the world of academia wasn’t for me. I saw a job opening as a technical editor, and I thought it would be a nice role. From technical writing, I eventually moved to popular science magazines and I just loved it! This transition wasn’t easy though. When you are doing your PhD, you have a supervisor who tells you what direction your research should take, what you should be doing. As an editor, I had to make decisions about many different aspects of the magazine: what kinds of stories to pursue, who to interview, what would go on the cover, how we would present our articles on the web, etc. In a way, I became my own boss. Getting to feel comfortable taking autonomous decisions was a long process, but absolutely worth it!

Well, this! Having the chance to visit institutes and other organizations around the world and meet the people who are doing science: last year I was in Boston for the ACS national meeting; Liverpool for the EuChemS conference; Brazil to give the inaugural C&EN/CAS Awards for Brazil Women in Chemistry & Related Sciences; in Cuba, for the Congress of Latin American Chemical Societies… All these places in only 3 months! The best part is bumping into old friends at conferences and meeting new people who are doing interesting stuff to overcome the world’s challenges.

How important do you think it is for scientists to explain their work?

What it means to be a scientist is changing. Not long ago one would be in the lab doing experiments, publishingthe results, attending the odd conferenceand that would be it. Science has evolved very far from that: we are increasingly open about collaborating, about how knowledge is generated and shared and I think it’s fundamental that scientists talk about their work. We, as a species, are facing global challenges and chemistry – as the central science that it is – will play a fundamental role to overcome these challenges. Chemists should claim that central science space and broadcast to the public and other scienctists. Aside from that, Chemistry still has a negative connotation, so we have a lot of work to do to change that!

Getting the job I have right now! For the last five years, I’ve had the honour of leading a great team in a prestigious publication for the largest scientific society in the world. Last year we received several awards and recognitions for our work, both as a team and individually, I’m very proud of the work the team is doing.

Could you tell me about a funny anecdote that happened in your career?

Barry Sharpless, Nobel in Chemistry in 2001, was recognized with the Priestley Medal this year. To commemorate the occasion, C&EN prepared a biographic piece and an article that included the speech he was going to deliver at the ACS national meeting. Unfortunately, while we were preparing the article, he was on vacation in Europe and only had access to a laptop that was missing some of the keys. So, we would receive emails without c, i, or capital letters… it was quite difficult to understand his emails! Of course, we had to persevere and after some deciphering effort, were able to make sense of it. At the end, we were very happy with the resulting article. It was an interesting process.

This might sound counterintuitive, but we need to keep fighting and…waiting. It’s difficult to be passive, but I think this is a generational change. There’s an RSC report stating that the number of female professors has raised from 4 to 9% in 10 years. This doesn’t seem very impressive, but it helps to take a step back and note that when I was born, Spanish women couldn’t open a bank account, own a house or a business without permission from a male relative. I don’t think anyone believes there are jobs for men and jobs for women anymore, but at the professor level, it is a matter of waiting until the generation that’s holding these posts now retire. Time will help change all of this. Look at me, for example, I’m the main bread-winner in my household. And I’m the youngest person ever to hold C&EN’s Editor in Chief position even when I’m a woman and not American! I think this proves things are changing.

Aside from powerlifting, I enjoy cooking. My favourite dishes are curries – a gift to the senses, food that makes you feel happy – so I cook a lot of them. I also bake with my kids.

If I went to Washington D.C., what should I visit?

The zoo: it’s very nice and completely free. Washington has a bunch of great museums, but I really recommend the zoo. There are elephants, pandas, even Komodo dragons…my kids love the idea of seeing living dragons!

A chemical element: my favourite element is mercury because it’s the only liquid metal in the periodic table and it’s pretty and dangerous at the same time – I like that duality. There’s also a very interesting expression in English: “to be as mad as a hatter.” In order to make the felt, hatters used a mercury catalyst and since the shops weren’t properly ventilated the mercury would accumulate, and the hatters would breathe the contaminated air and hallucinate, hence the expression. Every time I think of it, Alice in Wonderland comes to mind.

A scientist: it’s difficult to choose just one! I have two of them: Ben Feringa and Frances Arnold. Feringa is a humble man, the kind of person whom a lot of people can identify with. He’s making a lot of effort to get people, especially young people, excited about science. I saw Arnold giving a talk and I admire the precision with which she speaks, every word matters! Also, when you start learning about her private life, it makes you admire her even more too. I respect them both as scientists, but importantly because they are also very nice people.

Favourite invention: There is no real invention in the field yet, but I think the work happening right now on artificial leaves and energy generation – and storage – will be a game changer. We have a really big problem regarding energy. Harvesting energy from the sun will be a crucial invention in the next 15 years, I hope.

If you had not been a scientist… I would have been a journalist! But I’m one…. maybe I’d had been a teacher because I think being a journalist is very difficult right now.

Favourite destination: Spain, I really like Santiago de Compostela and Granada. They have many similarities: relatively small historic cities, close to the sea, with universities and a big student population. I’d go live there any time.

A book: I read many articles but few books lately. It’s difficult when you have twin 8-year olds… but I’d say “A hundred years of solitude” by Gabriel García Márquez. But my favourite author is Isabel Allende, I like her style of magic realism.

A movie: Out of Africa – although surprisingly I didn’t like the book.

A dream: I’d like my children to accomplish all their dreams. I wish to help them find their talents from a young age and give them opportunities to develop and become whatever they want to be.

Previous
SUNRISE and ENERGY-X joint cooperation: a major step towards building a climate neutral EU
Next
Congratulations, Dr. Gómez!
This website uses cookies to facilitate user navigation. You can get more information or change the settings of your browser by clicking here. ACEPTAR