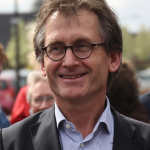 Born into a farming family of ten, Ben Feringa has always been fascinated by nature. He studied Chemistry at the University of Groningen, where he also obtained his PhD with the thesis entitled “Asymmetric oxidation of phenols. Atropisomerism and optical activity” under the guidance of Professor Hans Wynberg. After a professional stint at Shell, Feringa returned to his alma mater as a lecturer, becoming full professor in 1988. Inspired by nature’s principles of molecular assembly, recognition, transport, motion and catalysis, his goal as a researcher is to exploit the full potential of synthetic chemistry to create new structures and functions. By focusing on the control of chirality as a guiding principle, he has been able to build molecular machines —controllable nanoscale structures designed to carry out machinelike functions. He was awarded the 2016 Nobel Prize in Chemistry for this discovery together with Jean-Pierre Sauvage and Sir J. Fraser Stoddart.

What are molecular machines and what does the future hold for them?

Molecular machines are things that move or have a special function at the nanoscale –one billionth of a meter in size. Our bodies are full of molecular machines, from ribosomes building proteins to the rods in our eyes. I design tiny motors and machines based on molecules, by mimicking the function of molecular machines in living systems. Now, we have managed to create motors on surfaces and even made a tiny muscle, so we can move things and therefore know that we can make this work. But, think of your car: our cars nowadays don’t look like Ford’s T model; planes don’t look like the ones built by the Wright brothers, either. We are now mastering the principles of the nanoscale; I’m convinced that with these principles we will be able to design all kinds of responsive materials like surface coatings or smart windows; materials that repair themselves, actuators for soft robotics; or smart pharmaceuticals, like drugs for high-precision medicine. There are all kinds of applications, now that we know the principles we can focus on many different problems.

Of course, I’ve had many failures. But first, let me say what science is about: you have an idea and you set out a trajectory to achieve that. Often enough, you need to design a detour because you were misled by your initial strategy or, simply, things didn’t work. This happens quite often in science, so you need to be able to stand that frustration and have backup ideas to start again. But also, you have to show perseverance and try things in another way. For instance, to make these motors on surfaces, these windmills and propellers, it took us eight or ten years to have everything ready because initially it didn’t work and we had to redesign. It’s usually during these detours when you hit on something really exciting. Sometimes, accidental discoveries might change your whole perspective – you need a bit of luck and serendipity!

Have you ever had an emotional reaction to a scientific discovery?

Oh, yes: I was quite emotional when we discovered that we could make an object rotate! I still remember it was a Tuesday at a quarter past five and the students asked me to go to the lab because they had something to show. So, I went and saw this spinning rotor with my naked eye, I was really emotional and couldn’t speak for several minutes because I saw something moving. These are touching moments, they don’t happen that often so, it’s really important to acknowledge them.

What advice you have for students?

First, be confident an believe in yourself. The second most important thing is to train and work hard because without that you will never become the athlete that wins the medal. I also believe it’s important to work smart, think about what you are doing and plan carefully: What does an experiment tell you? How can you translate what is known in the literature? This kind of questions. Students shouldn’t be afraid to think critically about what’s on the literature – or what professors tell you –, it could be different. Think a bit out of the box, use your brain, be creative.  Becoming a researcher can be difficult, but don’t give up too easily. It’s also important to take pride in your accomplishments, even if it’s a small discovery or breakthrough: be happy that you did it. Nobody else did it, it was you, for the first time in this world!

Do you think it’s important for scientists to explain their work to the general public?

I think this is an extremely important duty because not everybody – including our politicians – appreciates science. They often ask me “what will the output be in three or four years?” This is the wrong question! It takes about 10 – 15 years for developments to be rolled out. You don’t make a new drug, material or industrial process in three years, so you need to tell the public – and politicians – why is this so difficult, why does it take so much time and what possible solutions are there. Humankind is facing complex problems and we need science to solve them – and chemistry will play a central role.

We need to help the general public, politicians, schools, and kids understand why science is so important. We need to educate and train our young people on the cutting edge, the frontiers of science. If we train our students for the problems of today, we are already doing the wrong job. They will be the ones doing the innovations in 10, 20 years from now! So, we have to train them to become the leaders in our industries, our societies. We should be training them to go far beyond the frontiers of what is possible now, to think non-conventionally and to come up with new solutions.

If I went to Groningen what should I visit?

I recommend visiting the coast with the big dikes that keep the sea out. Since part of our country is below sea level, we reclaimed a lot of land from the sea over the years. Now we have these modern and huge dikes, but we started building them in the middle ages already. Sometimes the water is higher than the land and it’s impressive– and quite beautiful!

A chemical element: is the basis for our discipline, it brings everything together! Obviously, for my favourite element, I’d pick carbon, because it builds up the organic molecules.

Favourite scientist: my favourite person related to science is Leonardo da Vinci. He has sometimes been called the first scientist – although some argue he wasn’t a scientist, he’s certainly on the top of my list – I think he was a genius.

If I hadn’t been a scientist… I’d be a farmer; I grew up on a farm and I always wanted to be a farmer

A book: there’re so many fantastic books! I have many favourite books, one of them is Michel Klayton’s Prey – it’s about nanobots that take over the world, a really special book!

Science is… a fantastic playground and a real joy: the joy of discovery!

Previous
ICIQ Alumna Yuanyuan Shi selected by FORBES as “30 under 30 Europe” in Science & Health Care
Next
All Hands on Deck
This website uses cookies to facilitate user navigation. You can get more information or change the settings of your browser by clicking here. ACEPTAR