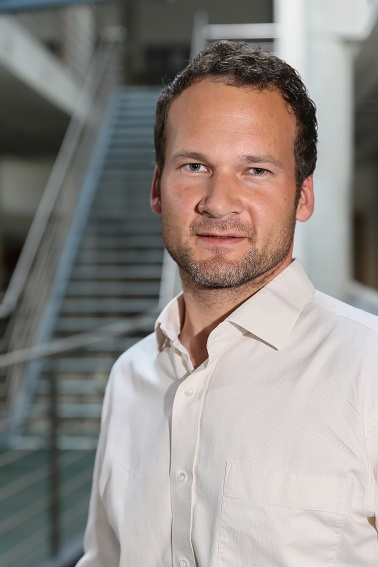 Nicolai Cramer is Assistant Professor of Organic Chemistry at EPFL, Lausanne (Switzerland). He works on the interface between organic synthesis and catalysis, on the development of new methods for organic synthesis and the synthesis of natural products. He graduated from the University of Stuttgart, where he also studied his PhD under the supervision of Prof. Laschat. He joined the group of Prof. B. M. Trost at Stanford University as a postdoctoral fellow and then moved to the ETH Zurich to work on his habilitation with Prof. E. M. Carreira. In fall 2010, he became Assistant Professor of Organic Chemistry at EPF Lausanne. He is the first ‘Marcial Moreno Mañas Lectureship‘ awardee and we had the chance to talk to him in our Face to Face.

When did you decide to become a scientist and why?

Already at school, when I was a child, I was interested in science. My parents thought that I would become a biologist because I was always collecting animals or feeding frogs. Suddenly, I had a passion for chemistry, I got one of those chemistry kits – that are probably forbidden now- and I could do cool experiments.  That got my interest. I studied chemistry, I loved it and I stuck to it.

At some point there is the point of no-return but I still do not regret it!

What do you like and enjoy the most in your job?

The freedom. You can do whatever is interesting for you. You have at least a certain degree of freedom  with which you can actually do research to solve an important problem or you can also take an academic diversion like solving a question that has been around for a long time. In industry people do great science but they are focused on one goal, whereas for me the great thing about my job is that you can also look at science. Sometimes, aside your original work there is something way bigger, more interesting, more important at the end, and you feel free to say ‘there was a real goal but this one is maybe the real thing’. To be able to do that is the most wonderful aspect of my job.

So far is not that long! There are two things: Your last achievement is always the freshest in your mind and you think that is the best one, which is probably true because you always go a lot further and further. I’ve done good things in catalysis, especially asymmetric catalysis.

But, at the end, the real achievement is once you have educated a good student, to see that s/he has become a researcher on his/her own or gets a good job in industry. For me, that’s the best achievement. To see how the grow and, if they finally become better than you, that is your biggest achievement.

You are the first Marcial Moreno Mañas lectureship awardee. What does it mean to you?

I didn’t know that much about that name but I looked at what he did and it is very impressive. He was a very important and highly respected chemist in Spain. I thought it was just a coincidence that the lecture was named after him, but just the idea behind that, to give a recognition to a young researcher, is something that deserves my highest respect. It should encourage more institutions to take that example and create those awards. If you can link it to some of the giants of your own region, then, it is even better.

Being the first one is always something very nice and I’m curious to see what happens in the next years! I’m sure Antonio and the team will make the right choice.

An advice? That’s difficult… You have to go your own way! Believe in you, that is probably the best advice I was given.

This is the third time for you at ICIQ. What do you think about our research institute?

I was really surprised that I got this lectureship, and when I got it I thought ‘Fantastic! I can finally visit again!’

The first time was a really great pleasure to be here, the second time even more because I already knew the place, great people doing fantastic science and, at the end, they are like a family! You read their papers, you see how their careers develop and you already know the people, so it is always great to see them. I hope it is not the last time I come here!

On the other hand, it puts some pressure on you because probably the students remember  what have you talked about the year before or the two years before that, so I should tell them something new!

You have to have spare time! I do lots of sports, swimming, running, cycling… cooking, I think there is not a single chemist that cannot cook!

A chemical element:  Oxygen
Favourite Scientist:  You have to admire how the old generations did those things in their laboratories. It’s difficult… Justus von Liebig
Your favourite invention:  The computers
If you had not been a chemist…   It’s hard to imagine something like that.
Favourite destination:  ICIQ (no? =) ). Going home from travel.
A book:  My notebook
A film: ’Pulp Fiction’
A dream:  Be like 18 years old again
Science is… a passion.

Previous
PhD Thesis Defence: Sara Goberna
Next
ChemComm published a Viewpoint article on Prof. van Leeuwen research
This website uses cookies to facilitate user navigation. You can get more information or change the settings of your browser by clicking here. ACEPTAR