Last Friday February 20th, the ICIQ community and friends joined professor Piet van Leeuwen for a symposium in his honor. Professor van Leeuwen retires from ICIQ to start a new research adventure as a visiting professor in the UFRGS (Porto Alegre, Brazil) and he will be also holding a Chair in the Chaires d’Attractivité programme of the Université de Toulouse, France. 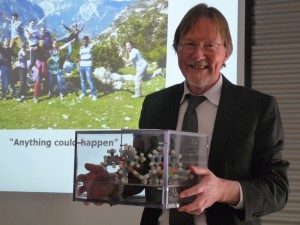 Piet received a 3D molecule as a present

The symposium’s invited speakers were professors Joos Reek (Amsterdam University), Dieter Vogt (University of Edinburgh), Carles Bo (ICIQ), Carmen Claver and Sergio Castillón (Universitat Rovira i Virgili). Professor van Leeuwen closed the event with a review of the soundtrack of his life as a researcher and as Piet.

Previous
Congratulations Dr. Henseler!
Next
Technion-ICIQ joint symposium on catalysis
This website uses cookies to facilitate user navigation. You can get more information or change the settings of your browser by clicking here. ACEPTAR