Prof. Martín has been devoting for the last 10 years to the development of nickel catalysed carboxylation processes using carbon dioxide as a raw material. Nickel has the advantageous of being a non-toxic and readily available transition metal, which makes it attractive for the development of synthetic applications. In particular, catalytic methods for the carboxylation of unsaturated hydrocarbons have been developed. It was found that a mixture of isomers of an alkene sharing the same hydrocarbon sekeleton produces under nickel-catalyzaed carboxylation conditions the linear carboxylic acid bearing the carboxyl group at a terminal carbon atom of the hydrocarbon chain. This unusual regioselectivity in this process is attributed to a “chain-walking” mechanism wherein the metal “glides” along the hydrocarbon chain to reach the terminal position that is more prompt to react with CO2 than other positions, thus leading to the terminal carboxylic acid formation. 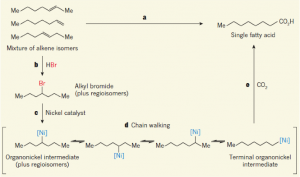 In a different approach, the dicarboxylation of 1,3-dienes was reported under similar conditions of reaction, allowing for the preparation of adipic acid from 1,3-butadiene. Adipic acid is commonly used in industry as a precursor of nylon 6,6. This new route to adipic acid shortens the current industrial process using KA oil as nylon precursor and employs less expensive raw materials. 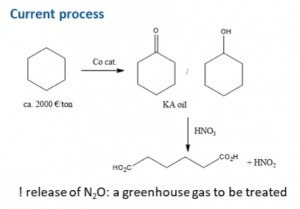 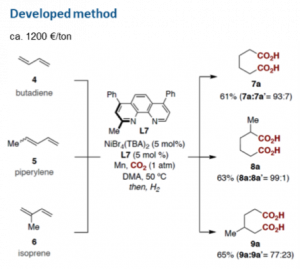