Pau Sarró, PhD student under the supervision of Prof. Marcos G. Suero, has defended his PhD thesis entitled “The discovery and development of a Rh-catalyzed carbyne transfer platform for the skeletal modification of C(sp2)–C(sp2) bonds” (assigned to the Organic and Analytical Chemistry Department of the Universitat Rovira i Virgili) publicly on April 26th. 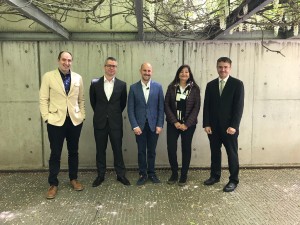 Dr. Sarró is from Sant Joan de Vilatorrada, a small town in the centre of Catalonia. He obtained both his bachelor’s and master’s in Chemistry from Universitat Autònoma de Barcelona before joining the G. Suero group for his PhD at ICIQ in 2017. Outside the lab, he enjoys spending time reading and making his own craft beer.

What is your thesis about and what applications can it have in the future?

My thesis is about the discovery of new ways to catalytically transfer carbynes, a reactive form of carbon that has been underdeveloped for a long time. With this new carbyne transfer platform, it is possible to transform simple and abundant chemicals such as ethylene or butadiene into highly functionalized chemicals which might make easier the synthesis of complex products like drugs.

From the lessons learnt (or skills developed) at ICIQ, which one do you value the most?

Critical thinking. I believe it was extremely important for my thesis, but also for my day-to-day life. It has made me grow as a scientist and as a person.

How to better manage my time. In the lab it is extremely important to know how to manage your time because the better you do it, the more reactions you will be able to run and thus, the more chances you will have to succeed.

Have you ever been emotional over an experiment/simulation? Why?

Yes, when experiments that you have been trying for some time finally work. When you see that something works after pursuing it for a long time, it feels amazing.

Who has been your biggest influence?

Probably my lab mate, Liyin. We’ve shared the same lab for four years and I have learnt a lot from him about how to deal with failure when things didn’t work. He always had a smile on his face and was always laughing and joking. I think this is really important to succeed in science because you will fail many times before succeeding, so you better laugh about it, otherwise, you’ll get burnout.

The thing that I like most about my thesis is…. To feel that it has been useful to broaden a bit the limits of chemistry and that we have discovered some novel reactions that might be useful in the future. In other words, we have made a small contribution to science that others might build up on in the future.

What is your favourite molecule?

Probably the carbyne equivalents that our group has developed. After working with something for four years, you end up loving it.

A TLC. It’s a super simple technique, but also efficient, fast and cheap.

I’m going to start my own company, a brewery. I’ve been homebrewing for some time now and I want to take it one step further and do it professionally.

Previous
Dr. Brandolese wins Oral Communication award
Next
Gratulacje Dr. Michaliszyn
This website uses cookies to facilitate user navigation. You can get more information or change the settings of your browser by clicking here. ACEPTAR