Dr. Daniele Mazzarella, former PhD student in the Melchiorre group has been awarded the 2nd prize of the Reaxys-SCI Early Career Researcher Award during the Merk Young Chemist Symposium organized by the Chemical Italian Society (SCI) in Rimini.

The aim of the Reaxys SCI Early Career Researcher Award is to increase the visibility of the work of young researchers and to support their career development in organizing several trainings on academic and publishing skills. For the award, members of the SCI Young Chemists Group were invited to submit an essay describing an original research project or idea involving a scientific database like Reaxys.

The essay by Dr. Mazzarella was based on the work he carried out at ICIQ under Prof. Melchiorre’s supervision, specifically on expanding the potential of established tools of asymmetric catalysis by photochemical activation. “We were exploring how to unlock novel functions in well-established catalytic intermediates for enantioselective catalysis upon light absorption. For example, we demonstrated that after light excitation chiral iminium ions and chiral iridium complexes transform from electrophilic intermediates to good single-electron oxidants, opening up new reaction pathways in organic synthesis. The Reaxys databases helped in the process of study the state-of-the-art as well as finding suitable substrates and so on. Specifically, in some cases the substrates we used were not commercially available, so Reaxys was extremely helpful to find synthetic routes to the substrates,” explains the scientist. 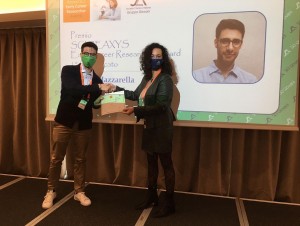 The winning essays were selected by a jury of two professors from the SCI, two researchers from SCI Young Group and two Elsevier representatives, who evaluated the relevance, originality and innovativeness of the proposals. Among the Elsevier representatives was ICIQ alumna Dr. Giulia Moncelsi, former PhD student in the Ballester group.

Dr. Mazzarella is now working as a postdoctoral researcher in Timothy Noël’s group at the University of Amsterdam, working on radical type processes using photochemistry and electrochemistry in microfluidic environments.

Previous
Dr. Champion wins Paul Dufour award for the best conference paper
Next
Dr. Dattila wins poster award
This website uses cookies to facilitate user navigation. You can get more information or change the settings of your browser by clicking here. ACEPTAR