Prof. Piet W. N. M. van Leeuwen, Group Leader at ICIQ, has been awarded with the 2005 Holleman Prize by the Royal Netherlands Academy of Arts and Sciences. The prize is awarded once every five years to a Dutch national who has carried out first-rate scientific research in the field of organic chemistry in a broad sense.

Prof. van Leuween has been also awarded with a Marie Curie Chair of Excellence. These Chairs are awarded for the purpose of making top-level appointments, in particular to attract world-class researchers and encourage them to resume their careers elsewhere in Europe. This particular project, jointly sponsored by the EU and the host institute ICIQ, in collaboration with the URV, concerns e-learning for a master course on homogeneous catalysis, teaching in a studio classroom, and the use of microfluidic reactor systems operated from the studio classroom.

For these reasons, all the ICIQ staff enjoyed a snack in the hall, in which Piet was congratulated for such important achievements. 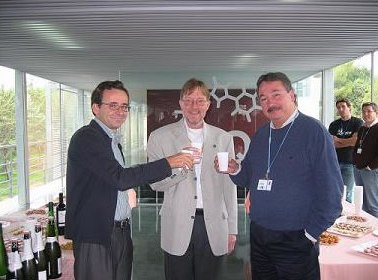 Previous
ICIQ’s Science Week 05
Next
The time of the innovation: a real case of industrial application of the research in the chemistry-pharmaceutical area
This website uses cookies to facilitate user navigation. You can get more information or change the settings of your browser by clicking here. ACEPTAR