Autumn has finally arrived in Tarragona and while the cold weather is turning leaves brown, we keep as active as ever. During the last few months, the ICIQ research community has worked to bring closer to society the promise of artificial photosynthesis.

José Ramón Galán-Mascarós and Núria López, ICIQ group leaders and coordinators of the a-leaf project, shared the stage during the scientific concert “La llum a les ones” with musicians, scientists, and high school students. The event, part of the European Researchers Night in Barcelona, was organized by ICFO and CCCB and combined different perspectives on science, science fiction, music, and climate change. 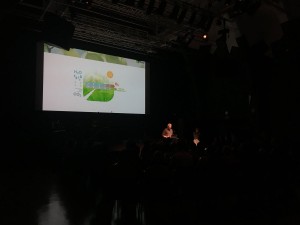 Closer to home, Álvaro Reyes, a postdoctoral researcher at ICIQ under JR Galán-Mascarós’ supervision and Laia Pallejà, ICIQ’s outreach officer, have also kept busy with the change of seasons. During the last month, they have introduced high school students enrolled in the Bojos per la ciència programme of Fundació Catalunya La Pedrera to the a-leaf project and explained the promises artificial photosynthesis holds to create a more sustainable future. They also inspired younger children at Fira CatBot, in Reus, where they used toy cars to illustrate the artificial photosynthesis process. 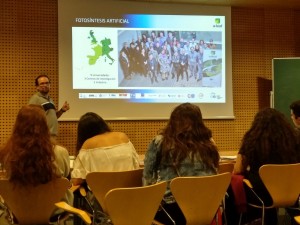 Previous
Congratulations Dr. Buzzetti!
Next
Congratulations, Dr. Garrido!
This website uses cookies to facilitate user navigation. You can get more information or change the settings of your browser by clicking here. ACEPTAR