This year, despite the uncertainty of the context derived from COVID-19, no activity has been abandoned. The programme for this edition includes workshops, talks and a scientific walk in which over 100 researchers have been involved. 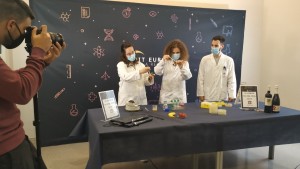 Some thirty video workshops have been prepared, which will be made public on November 27 and in which a hundred researchers will take part. Many of these workshops address aspects related to virtually all scientific disciplines and can be done with ingredients easily found at home. The videos will be available on the European Researchers’ Night website (tarragona.nitdelarecerca.cat) from 27 November. One month earlier, starting October 27, the weekly programme Som-hi! of TAC12 will broadcast two workshops per week as a teaser of those that will be premiered on November 27.

On the same day of the European Researchers’ Night, November 27 at 6 pm, the Llotja de Reus will host a session of nine short talks (registration mandatory). Scientific dissemination will also reach high schools in various towns in the demarcation. During the week of November 23rd to 27th, researchers will give talks – in virtual or face-to-face format, depending on the current conditions – to ESO and high school students.

The Antoni de Martí i Franquès scientific walk has been scheduled for Saturday 28th November at 11am. It is a didactic theatrical recreation of the life of this Catalan scientist and his discoveries. Participants will visit streets and palaces in the historic centre of Tarragona that are related to his life and research, from the Camp de Mart to the Pla de la Seu. Registration is required to participate.

To complete the programme, researchers from the Marie Sklodowska Curie Fellowship Programme of the European Commission will explain in video format their research, which will be complemented by a poster to understand it more graphically.

The Catalan European Researchers’ Night project is a two-year proposal similar to each edition, which is being organized for the third year in a row in Tarragona: the first two as Associate Night and this year with the official seal of the European Union.

Universitat Rovira I Virgili coordinates the event and organizes together with the research institutes of the territory: Catalan Institute of Classical Archeology (ICAC), Catalan Institute of Chemical Research (ICIQ), Pere Virgili Institute for Health Research (IISPV) and Institute of Human Paleoecology and Social Evolution (IPHES). In addition to the URV, there is the UdG, which coordinates the Catalan project, the UB, the UAB, the UdL, the UVic and the ISGlobal. The organization of this event has also had the collaboration of the Diputació de Tarragona, the European Commission and the Ajuntament de Tarragona, through the Conselleria d’Educació and the Institut Municipal d’Educació de Tarragona (IMET). Reus City Council, the city’s Chamber of Commerce, Tac12 and the Tarragona Central Market also took part.

Previous
ICIQ participates in the Catalunya Sud Green Hydrogen Platform to speed up the energetic transition
Next
Leading scientific associations and innovative companies demand to place R&D at the heart of Spain’s strategy
This website uses cookies to facilitate user navigation. You can get more information or change the settings of your browser by clicking here. ACEPTAR