For the first time, the awards recognise scientific talent in the Iberian Peninsula in three categories: best doctoral thesis, patent and entrepreneurship project 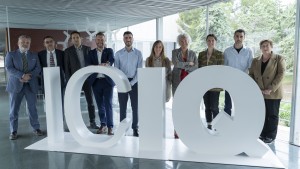 This Wednesday was held in the city of Tarragona the awards ceremony of the first edition of the BASF-ICIQ Awards for Innovation and Entrepreneurship, which was attended by the winners, scientific community and authorities. Gathered in the auditorium Professor Doctor Kilian Muñiz at the Institute of Chemical Research of Catalonia (ICIQ), Professor Emilio Palomares, director of the Institute expressed the importance of collaboration between BASF and ICIQ to promote knowledge transfer and excellence in chemical research.

The award to the best doctoral thesis recognised the research carried out by Dr. Diego Mateo, in which he applied photocatalysis to produce hydrogen. The awardee has travelled from Saudi Arabia, where he is currently working as a postdoctoral researcher, and highlighted the importance of recognising scientific work.

The talent of the Universitat Rovira i Virgili (URV) and Cromogenia Units, S.A. was embodied by doctors Marina Galià, Gerard Lligadas and Maite Guillén, who obtained the award to the best patent for their contribution to more ecological polymers in textiles.

Polymers have also been the focus of the award to the best entrepreneurship project, led by Dr. Coralie Jehanno and Dr. Andere Basterretxea, whose sustainable and circular economy-based vision offers quality plastics for industry.

Dr. Xavier Aldeguer, Director of Knowledge Transfer of the Generalitat de Catalunya celebrated in his speech the collaboration between private industry and top research centres such as ICIQ.

The event concluded with some words of Xavier Ribera, Director of Communication, Institutional Relations and Sustainability of BASF Española in the Iberian Peninsula, who expressed the importance of research and science to address the main challenges humankind faces in order to make a sustainable future a reality.

Previous
13 students will benefit from Summer Fellowships to foster scientific vocation with a summer stay at ICIQ
Next
The ICIQ Master Projects Fellowships Call is open!
This website uses cookies to facilitate user navigation. You can get more information or change the settings of your browser by clicking here. ACEPTAR