José Enrique Gómez Pulido, former PhD student in the Kleij group has been awarded the 1st prize of the Reaxys-RSEQ Early Career Researcher Award during the XVI Simposio de Jóvenes Investigadores RSEQ– Sigma Aldrich (Merck) celebrated in Valencia. This is the third year Elsevier and the Spanish Royal Society of Chemistry (RSEQ) organize the Early Career Researcher Award to recognize the work of young researchers who use scientific databases such as Reaxys.

To participate, the members of the RSEQ’s Young Chemistry Researchers group write an essay highlighting how the use of the Reaxys scientific platform helps daily to develop and advance their research projects. In particular, Gómez-Pulido has been awarded for his research focused on the development of new stereoselective catalytic processes for the synthesis of sulfones and amino acids from functionalized heterocycles. “This is a remarkable opportunity to communicate the research we are doing in the Kleij group at ICIQ. The recognition is also an encouragement to apply for other competitive opportunities in the near future,” says Gómez Pulido.

The essays were evaluated by a jury of six experts in chemistry belonging to both Elsevier and the RSEQ, among whom is Ana G. Herraiz, former ICIQ PhD student under Marcos Garcia Suero’s supervision and winner of the 2018 Reaxys-RSEQ Early Research Award. The experts assessed the essays according to their scientific innovation and originality, impact and importance in the field, clarity of thought and completeness. 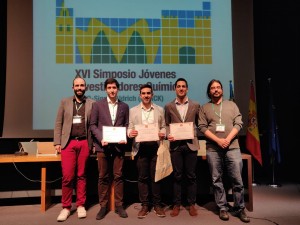 Previous
Marcos García Suero wins a Leonardo Grant
Next
Prof. Arjan W. Kleij joins the Organic Chemistry Frontiers journal as an Associate Editor
This website uses cookies to facilitate user navigation. You can get more information or change the settings of your browser by clicking here. ACEPTAR