Ángel L. Mudarra, PhD student under the supervision of Prof. Feliu Maseras (ICIQ) and Dr. Mónica H. Pérez-Temprano (ICIQ), has defended his PhD thesis entitled “Coinage Metal Complexes in C-C and C-N Bond-Forming Reactions” (assigned to the Department of Physical and Inorganic Chemistry of the Universitat Rovira i Virgili) publicly on February 14th at the ICIQ Auditorium. 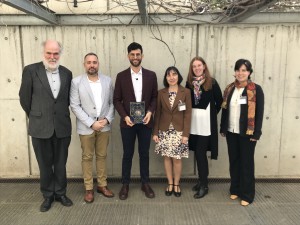 Dr. Mudarra with the members of the evaluation committee and his thesis supervisors

Dr. Mudarra was born in Escacena del Campo (Huelva), Spain. He studied chemistry at the University of Huelva and then he did his master’s degree at the University of Sevilla. After that, he decided to do the PhD at ICIQ thanks to a La Caixa-Severo Ochoa PhD fellowship. He likes running, cooking and taking care of his plants.

I studied science because, since I was young, I’ve always liked to understand the things that happen around me. I think I chose wisely when I decided to study chemistry, but I have the feeling that I still have a long way to go in order to understand things well. My objective is to use science to satisfy my curiosity.

There are actually two things that I value the most. First is to have been able to work in an international environment where I have learned teamwork, how to communicate with people from different scientific and geographic backgrounds and to be patient. I also think the seminars are a great asset, I had the opportunity to meet professors I wouldn’t have met at conferences.

One that I remember is the one day that Maria, the receptionist, pressed by mistake the emergency button instead of the door button. The alarm went on all around the institute and she had to warn on the speakers that it was a false alarm. I will also miss the PhD days, the meals with my “lunchers” and all the times we saved the future of humanity with our ideas.

I will return to Huelva and will start looking for a job from there. My idea is to do a postdoc abroad, but I’m not sure where yet.

Without a shadow of a doubt, I would be a glovebox. I’ve used it a lot and I think there’s no other device that feels as loved by its users as a glovebox. I gave it several hugs a day!

Previous
Congratulations Dr. Somerville, we’re stoked!
Next
Kick-off of the SUNERGY initiative
This website uses cookies to facilitate user navigation. You can get more information or change the settings of your browser by clicking here. ACEPTAR