Nature is a role model when it comes to recycling waste. What one organism produces as waste is re-used as nourishment by others, creating a dynamic and balanced cycle that depends on all organisms to function properly. The TRIPyr project has the same vision. Uniting a force of seven partnering organisations across the Pyrenees, the project focuses on the recovery of industrial waste related to the agri-food and pesticide industries.

“This project is a great opportunity to combine the very different expertise of research groups with diverse focus to tackle important, real-world problems such as the safe disposal of dangerous, potentially harmful residues by converting them into useful products while improving the quality of the environment,” explains Miquel Pericàs, ICIQ group leader and director.

With a two and a half years timeframe and a total budget of 1.286.843,62 €, TRIPyr (which has just released its first newsletter) aims to stimulate circular chemistry and economy that benefits the business fabric of the Aquitaine, Aragón, Navarra and Catalonia areas with better management of resources. The ultimate goal of the project is to create new industrial opportunities based on research, development and innovation (R&D+I). To do so, the consortium includes a communication association (Ecocène), a company (SAPOVAL), two technological centres (MEPI, AIN) and three research laboratories (ICIQ, CNRS (coordinator) and ISQCH), among which are three ICIQ research groups: the Pericàs, Kleij and Martin laboratories. 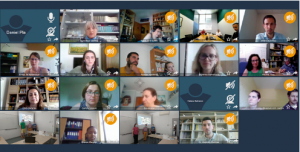 Screenshot of the virtual kick-off session.

TRIPyr’s strategy is to develop cutting-edge catalysis-based methodologies, a tool with high selectivity and economy of atoms and energy, for the transformation of raw materials. The industrial transfer of the studied processes will be carried out through discontinuous (batch) and continuous flow scaling studies for the catalytic transformation of industrial fatty residues of animal origin, as well as aliphatic halogenated residues, into valuable products. In the words of Arjan Kleij, ICIQ group leader involved in the project: “This project offers great motivation to use our in-house developed catalytic technologies to recycle animal-based fatty acids and to produce sustainable products, such as biobased polymers, from otherwise low-value waste streams. As such, catalysis processes originally developed for bench-scale, fundamental purposes can now be made available to solve problems associated to waste processing and reutilization.”

Complementarity between the partners, both at the academic and industrial transfer level, will allow the implementation of optimized processes. The expected success of this project is based on the capitalization of knowledge in catalysis by academic laboratories and the vast experience in transfer on a pilot scale by technology centres, together with the direct participation of an SME (small and medium-sized enterprise), which will act in the whole of the territory.

The TRIPyr project has been 65% cofinanced by the European Regional Development Fund (ERDF) through the Interreg V-A Spain-France-Andorra programme (POCTEFA 2014-2020). POCTEFA aims to reinforce the economic and social integration of the French–Spanish–Andorran border. Its support is focused on developing economic, social and environmental cross-border activities through joint strategies favouring sustainable territorial development.

Previous
PHOTO-RX project granted by AGAUR
Next
ICIQ alumni Josep Cornella among C&EN’s Talented 12 of 2020
This website uses cookies to facilitate user navigation. You can get more information or change the settings of your browser by clicking here. ACEPTAR