Photoreceptors in vertebrates typically consist of two different, colourless parts: an organic pigment and a protein. When both pieces combine, they create a colourful, light-sensitive molecule –an iminium ion– that triggers vision upon light excitation. Inspired by this mechanism, a team of researchers at the Institute of Chemical Research of Catalonia (ICIQ) created a new family of sustainable, environmentally friendly catalysts that can be ‘switched on’ using purple LEDs.

Chemically modifying natural amino acid proline, chemists designed a set of organocatalysts with quite attractive properties. When the catalysts react with the substrate of the reaction, they form iminium ions, like the ones in our retinas. “This transformation entails a visual colour change. Hence, we can know when the intermediate is formed,” explains Mattia Silvi, first author of the Nature Chemistry paper. “Then, we just need to activate it using a purple LED and the product of the chemical reaction will be ready in a few hours,” he adds. Moreover, catalysts have been carefully tailored to induce the formation of single-handed isomers –enantiomers– of the chiral products, which are very useful for the pharmaceutical industry. In general, single enantiomers have fewer adverse effects and an improved therapeutic profile. 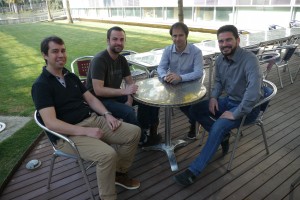 Part of the team that carried out this research, led by Prof. Paolo Melchiorre (right).

“Despite being a well-known mechanism in biochemistry, the photo-excitation of iminium ions hadn’t been used to make chiral molecules yet,” says Paolo Melchiorre, ICIQ Group Leader and ICREA Professor, who led the study. “Thanks to this novel approach, triggered by visible light, we can obtain products that were impossible to achieve using traditional thermally-activated transformations,” he adds.

Another key feature of these new catalysts is their implication with sustainability. They are organic catalysts, and since they do not contain any metal, they are way cheaper and easy to handle. Besides avoiding the need for expensive palladium or ruthenium catalysts, the products of these light-triggered reactions are easier to purify. Also, these catalysts don’t require thermal activation, allowing chemists to easily develop transformations at ambient temperature.

Proline-derivatives are among the most popular organocatalysts in chemistry. Hence, this new discovery could have wide implications. Extending the applications of these catalysts to other chemical transformations could reduce their environmental impact while giving access to previously unknown chiral molecules.

Previous
Congratulations Dr. Romero!
Next
New Doctor at ICIQ!
This website uses cookies to facilitate user navigation. You can get more information or change the settings of your browser by clicking here. ACEPTAR