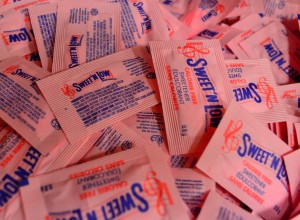 Sugar alcohols are applied in the food, pharmaceutical, polymer, and fuel industries and are commonly obtained by reduction of the corresponding saccharides. Now, researchers at ETH and ICIQ created a molybdenum heteropolyacid-based catalyst to transform glucose, arabinose, and xylose into less-abundant mannose, ribose, and lyxose, respectively. Then, these sugars are hydrogenated over ruthenium catalysts to yield the desired polyols with outstanding kinetics.

Qiang Li and Núria López (ICIQ) performed the computational calculations that explain the adsorption mechanisms and the low energy barrier for the addition hydrogenation state. This study opens a prospective route to the efficient valorization of renewables to added-value chemicals. ‘Thanks to the powerful resources of the Barcelona Supercomputing Center and the Spanish Supercomputing Network we were able to model catalytic processes with an unprecedented level of precision and complexity,’ says López. ‘This new approach increases the potential applications of biomass in industry,’ she concludes.

Previous
López’s group on the cover of ACS Catalysis
Next
Unravelling the secrets of cluster crystallization
This website uses cookies to facilitate user navigation. You can get more information or change the settings of your browser by clicking here. ACEPTAR