Bruna Sánchez, PhD student under the supervision of Prof. Feliu Maseras (ICIQ), has defended her PhD thesis entitled “Beyond Conventional DFT Catalysis: Mechanochemistry and Solid Reductants” (assigned to the Department of Physical and Inorganic Chemistry of the Universitat Rovira i Virgili) publicly on November 19th. 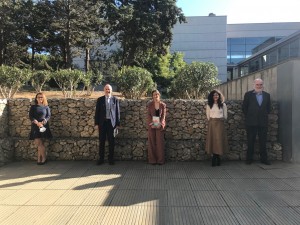 Dr. Sánchez is from Taradell, a small village next to Vic. She studied Chemistry at Universitat de Barcelona and during her last summer as an undergraduate, she joined the Maseras group as a Summer Fellow. Since then, she has moved to Tarragona to join, first, the ICIQ/URV Master in URV/ICIQ Master in Synthesis, Catalysis and Molecular Design and then the Maseras group as a PhD student. Outside the (computational) lab she enjoys travelling and practising all kinds of mountain sports.

Why did you decide to do science?

Honestly, because I knew I wasn’t born for the arts, so I chose to go into science! I was fascinated when the teachers at school started explaining the atoms and how they worked, so I decided to study chemistry.

What would you like to achieve as a scientist?

I don’t have a scientific goal, but I would like to somehow help people get closer to science. For instance, when I had to decide what to study, I felt quite lost and didn’t really understand the differences among many fields of science, so I’d like to find a way to help students sort this out and make it easier for them to choose a career.

What would you say to someone starting their PhD now?

Even though research is the cornerstone of a thesis, at ICIQ we have the opportunity to do many different things, like participating in outreach activities or organizing the PhD day. I think PhD students can learn a lot from these experiences. We do science, but we also have to communicate what we have done to society.

To know how to deal with frustration. I think it’s very important to learn to handle frustration because it’s something that everyone faces at some point during the PhD. I had to learn to take my mind off work, and what worked the best for me, was climbing. It’s been a great escape valve that really helped me disconnect!

Who or what has been your biggest influence?

My mom! She has always been my role model and has given me unconditional support.  Seeing her living her life I learnt that I could do whatever I wanted to do.

What moment will you never forget?

My colleagues’ thesis! Seeing their proud (and sometimes exhausted) faces after all the years of hard work was very emotional. And I hope they won’t forget about my thesis!

If you were to be a piece of lab equipment, what would you be?

In the computational lab, we have these orange small chairs we use to work at another person’s desk. I feel I’ve had many moments during these years when someone helped me or I helped someone while sitting in those chairs. We are always fighting over them because there’s only four and there’s a bunch of people in the computational lab!

Previous
Tribute to the chemist Antoni de Martí i Franquès
Next
ICIQ hosts the annual meeting of the TRIPyr project
This website uses cookies to facilitate user navigation. You can get more information or change the settings of your browser by clicking here. ACEPTAR