Santiago Cañellas, PhD student under the supervision of Prof. Miquel A. Pericàs (ICIQ), has defended his PhD Thesis entitled “Smart Catalytic Systems for Batch and Continuous Flow Enantioselective Processes” (assigned to the Department of Analytical & Organic Chemistry of the Universitat Rovira i Virgili) publicly on November 20th at the ICIQ Auditorium. 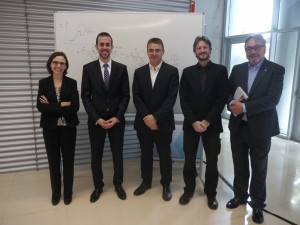 Dr. Cañellas with the members of the evaluation committee and his supervisor, Prof. Miquel A. Pericàs

Dr. Cañellas is from Mallorca, he studied chemistry at the University of the Balearic Islands. After finishing his masters in organic chemistry, he moved to ICIQ to pursue a PhD in the same field. He likes practicing any sport where a ball is involved: volleyball, football, ping pong, tennis… all of them!

In a way, Organic Chemistry was an unexpected passion. I had an excellent chemistry teacher in high school, Beatriz Asensi. Then, by the time I reached the University, I had some outstanding professors in organic chemistry, such as Ángel García Raso and José M. Saá, so I started following that path until I came to ICIQ, where Miquel Pericàs showed me his passion for organic chemistry. My dream would be to work in a pharmaceutical company and contribute with my knowledge to the development of new drugs for neurological diseases, although contributing to any disease would be extraordinary.

What ICIQ moment you´ll never forget? What will you miss the most from ICIQ?

There was a postdoc in our group called Tharun, and when he left ICIQ we threw him a farewell BBQ. After eating and chatting we started dancing Spanish and Indian music. He’s a great dancer! Some people in the group ended up on the stage dancing together and it was so much fun!

Don’t spend too much time dwelling on a problem. Instead, think about how to actually solve it. Pay attention to the details, they make the difference. I would also say it is good to doubt everything, even what is written in a book, and even what you think is the truth.

I’ll spend one more year here at ICIQ as a postdoc. In some years, I see myself in a pharmaceutical company contributing to the development of new drugs in an R+D+i department.

Previous
Dr. Scharnagel wins City of Bayreuth award
Next
Toni Llobet gives opening lecture at Universidad de Zaragoza
This website uses cookies to facilitate user navigation. You can get more information or change the settings of your browser by clicking here. ACEPTAR