Lucas Carreras, PhD student under the supervision of Prof. Anton Vidal (ICIQ) has defended his PhD Thesis entitled “Supramolecular Catalysis: Halogen Bonding and Regulation Strategies Applied to Hydroboration and C-H Functionalization Reactions” (assigned to the Analytical and Organic Chemistry Department at the Universitat Rovira i Virgili) publicly on July 17th at the ICIQ Auditorium. 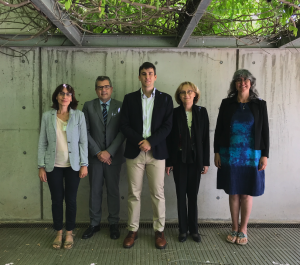 FOTO Dr. Carreras with the members of the examining committee and his supervisor, Anton Vidal.

Dr. Carreras grew up in Menorca, part of the Balearic Islands. He obtained both his BSc and MSc in Chemistry at the University of the Balearic Islands, moving then to Switzerland as an intern in Syngenta Crop Protection for 9 months in 2014. He then moved to Tarragona to ICIQ to pursue his PhD. As a Mediterranean, he will miss enjoying time in platja dels Capellans and platja Llarga in his spare time.

Since I can remember, I have been a curious individual. Besides, at high school I was doing well at sciences, so when it was the time to decide what to do, I knew it had to be something related to science. Very nice chemistry laboratory lessons during my baccalaureate finally biased me for chemistry.

What would you want to achieve as a scientist?

I think Earth is in urgent need for higher environmental ethics. In this sense, as a scientist, I would be very satisfied if any of my future contributions would help alleviate this burden.

At ICIQ you have the chance to meet with people from all over the country and the world. I think this helped me in being open-minded and learn about different philosophies to face life.

That a PhD requires proper time management, initiative and resilience.

I am going abroad to an industrial placement. I have signed a confidentiality agreement… let’s say that something related with chemistry.

No idea, but many times I have considered having a stirring plate at home for cooking purposes (not with Walter White and/or Jesse Pinkman).

Previous
Auguri, Dr. Gelmetti!
Next
New doctor at ICIQ: congratulations Dr. Casadevall!
This website uses cookies to facilitate user navigation. You can get more information or change the settings of your browser by clicking here. ACEPTAR