Mauro Mato, PhD student under the supervision of Prof. Echavarren, has defended his PhD thesis entitled “Streamlining the Access to Metal Carbenes through Aromative Decarbenations” (assigned to the Organic and Analytical Chemistry Department of the Universitat Rovira i Virgili) publicly on July 22nd. 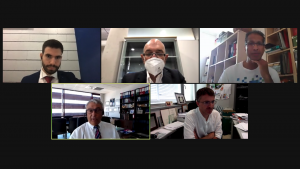 Dr. Mato with the members of the evaluation committee and the thesis supervisor

Dr. Mato was born in Ferrol (Spain). He obtained his degree in Chemistry from the Universidade da Coruña in 2016 and then came to Tarragona to do the URV–ICIQ Master in Synthesis, Catalysis and Molecular Design. In 2017, he started his PhD at the Echavarren group. He likes climbing and doing other mountain sports, he also loves music and plays the guitar.

Which is the most important skill you learnt during your PhD?

Time management is the most important thing I learnt during these years. In the first year I worked so many hours but in a much less focused way. Thanks to experience and looking at how my lab mates worked, I realised there were more efficient ways to organise one’s time and workload.

I remember when I joined the Merck challenge together with four lab mates from the Echavarren group. It was a competition in which we had to suggest a synthesis of a compound. It had funny, interesting but also frustrating moments at the same time: it was like doing a PhD in one weekend.

Avoid tunnel vision. A PhD should be a very broad project, so don’t get too fixated on something in particular. Be open-minded, be always on the look for new ideas and test them experimentally to see if your hypotheses are correct.

I will join the Cornellà group at the Max-Planck-Institut für Kohlenforschung as a postdoc in October.

Who has been your biggest influence?

Robert B. Woodward. He was a pioneer in the synthesis of complex natural products and won the 1965 Nobel Prize in Chemistry for his “outstanding achievements in the art of organic synthesis.” The idea of “chemistry being a form of art” really caught my attention, and it has always been one of my biggest inspirations. You need to be creative to discover new reactions, which can be beautiful in a very special way.

A Thin Layer Chromatography plate because it’s simple but very useful. I did thousands of them during my PhD. It’s one of the oldest lab techniques but still one of the most used.

What is your favourite molecule?

I would say vitamin B12. It is a surprisingly complex molecule, which has a bit of everything. Woodward’s and Eschenmoser’s collaborative total synthesis of this molecule was one of the first I ever read, and a key piece of inspiration for me to become an organic chemist.

Previous
Félicitations, Dr. Raymond!
Next
Congratulations, Dr. Qingqing Sun!
This website uses cookies to facilitate user navigation. You can get more information or change the settings of your browser by clicking here. ACEPTAR