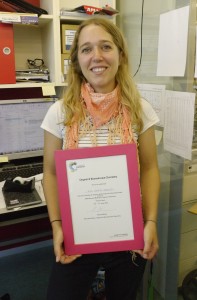 The poster describes a diastereoconvergent alkene cyclopropanation reaction by means of photoredox catalysis. The process allows the synthesis of complex cyclopropanes and it is based on the catalytic generation of radical carbenoids; a novel triplet carbene equivalent, whose behaviour is opposite to classical carbene species.

Previous
Congratulations to Elena!
Next
Synthesis of Lundurines A-C highlighted in Synfacts
This website uses cookies to facilitate user navigation. You can get more information or change the settings of your browser by clicking here. ACEPTAR