On Thursday, October 30th, Prof. Piet van Leeuwen was invested Doctor Honoris Causa by the Universidade Federal do Rio Grande do Sul (UFRGS). During the ceremony, the Rector of the University, Carlos Alexandre Netto, said that this is the highest honour of the institution and the recognition of the scientific and academic community. Meanwhile, Prof. van Leeuwen said that he feels very honoured with the distinction and emphasized his professional and personal relationship with professors of UFRGS. 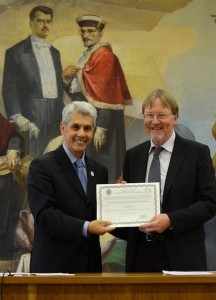 From the beginning of his career, Prof. van Leeuwen has contributed impressively in the development of homogeneous catalysis worldwide and has been internationally recognized by academia and industry with many awards and titles. He worked with Shell for 26 years in a wide variety of topics related to homogeneous catalysis. In 1989 he founded the homogeneous catalysis group at the University of Amsterdam, which he directed until 2007. In April 2004, he was appointed as a Group Leader at ICIQ, where he has been working since.

He is Emeritus Professor of Homogeneous Catalysis at the University of Amsterdam and Emeritus Professor of Industrial Homogeneous Catalysis at the Technical University of Eindhoven. In 2005 he was honoured with the Holleman Prize by the Royal Netherlands Academy of Arts and Sciences. From 2006 to 2009 he held a Marie Curie Chair of Excellence at ICIQ. In 2009 he was invested Doctor Honoris Causa by the Universitat Rovira i Virgili and was awarded a European Research Council Advanced Grant for his project “A New Vision of Nanocatalysts, NanosOnWings”.

Previous
ICIQ honors Professor Luis A. Oro
Next
Vidal et al. paper in the inside cover of Chemistry A European Journal
This website uses cookies to facilitate user navigation. You can get more information or change the settings of your browser by clicking here. ACEPTAR