The MAKI project, led by Dr. Gemma Aragay (Ballester group) and Dr. Ruslan Alvarez (ICN2), and the QEE2DUP project, led by Dr. Roshan Krishna Kumar (ICFO) and Dr. José Ramon Durán (ICN2), have won the 2021 BIST Ignite Awards. These awards recognise the two most promising projects from among the five selected in the “seed” phase of the 2019 edition of the BIST Ignite programme, an initiative to promote multidisciplinary research through research collaborations between groups from different BIST centres. 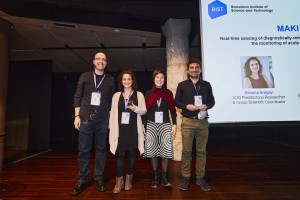 The two winning projects will receive 50,000 euros each to begin a second research phase, which will further advance their results. The 2021 BIST Ignite Awards ceremony will be held on April 7 at the La Pedrera Auditorium.

The aim of the MAKI project, led by postdoctoral researchers Gemma Aragay, of the Catalan Institute for Chemical Research (ICIQ) and Ruslan Alvarez, of the Catalan Institute of Nanoscience and Nanotechnology (ICN2) —who has taken over from Dr. Claudio Parolo (ICN2), co-leader in the first phase—, is to develop a device capable of detecting two combined biomarkers of acute kidney injury (AKI) quickly and effectively. AKI is a common complication after major surgeries. It can appear within hours or days and can impact other organs or even lead to death if not treated quickly. Measuring creatinine in urine (uCRE) is currently the best way to test kidney function, but recent studies have shown that measuring uCRE simultaneously with another urinary biomarker called Urinary Neutrophil Gelatinase-Associated Lipocalin (uNGAL) is more reliable and accurate.

The MAKI project has set out to develop a portable sensor attached to a urinary catheter to monitor CRE and NGAL levels in patients. During the seeding phase of the project, researchers combined multidisciplinary expertise to begin developing two independent but complementary sensors for NGAL and CRE. Preliminary results have shown promising outcomes in both independent approaches, and will inform the second stage of the project, which will include the measurement of CRE and NGAL at the solid-liquid interphase and move to artificial and real urine, bringing the project closer to developing a portable device.

The QEE2DUP project, led by Dr. Roshan Krishna Kumar (ICFO) and Dr. José Ramon Durán (ICN2) —who take over the leadership of Dr. Antoine Reserbat-Plantey (ICFO) and Dr. César Moreno (ICN2) during the seeding phase— has set out to design a new material based on atomically precise graphene nanostructures that could increase communications security and amp up quantum computing capabilities through a new way of designing “quantum chips”. With the 2019 BIST Ignite Grant, the group has begun this ambitious project by attempting to confine excitons — which are bound states of an electron and electron hole — in 2D materials to create quantum light sources. The project has generated discussions about these so-called single photon light sources – a growing field of interest – leading to a publication in ACS Photonics in 2021. During the project’s first phase, the researchers performed exciton measurements using a micro-cryo-photoluminescence technique and a state-of-the-art nano-electron-spectroscopy technique (through facilities grants at the Molecular Foundry User Facility in California and the Laboratoire de Physique des Solides in France). During the second phase, the group plans to further explore and confine excitons in the 2D material MoSe2, which could lead to novel exciton trapping mechanisms and even in situ control of quantum light.

The BIST Ignite programme has already invested more than one million euros in cutting-edge research projects, some of which have shown great potential for transfer to the market and have become international collaborations. Since its inception, 10 BIST Ignite Awards (THEIA, INWOC, GENSTORM, ENGUT, Q-SPET, PHASE-CHROM, BIOSPAD, BIOVAC, MAKI and QEE2DUP) have been awarded, including the two presently announced. They were selected from among 28 initial-phase projects funded through yearly competitive calls. In total, these projects received 1,010,000 euros in funding from BIST and have involved more than 200 researchers. Additional information about the BIST Ignite Programme can be found here.

Previous
ICIQ participates in Inspira STEAM
Next
Lilly & the RSEQ award Dr. Juliá with the “Young Investigator 2022” Prize
This website uses cookies to facilitate user navigation. You can get more information or change the settings of your browser by clicking here. ACEPTAR