The first issue of 2007 of Angewandte Chemie, the prestigious scientific Journal, that commemorates Wiley’s 200 years and is fully dedicated to Supramolecular Chemistry in its 40th anniversary, contains 27 articles from some of the leaders in the field, such as George Whitesides, Jeremy Sanders, Julius Rebek, Fraser Stoddart o François Diederich, among others. It is not a special issue with invited articles, but made of regular contributions accepted for publication in the Journal, which reflects the current impact of this discipline. It is worth to highlight that up to six communications were contributed by Spanish groups, and two among them are authored by ICIQ’s researchers.

Thus, the article Selective binding and easy separation of C70 by nanoscale self-assembled capsules (Angew. Chem. Int. Ed. 2007, 46, 202-205), co-authored by Elisa Huerta, Dr. Gerald A. Metselaar, Dr. Alex Fragoso, Eva Santos, Prof. Carles Bo and Prof. Javier de Mendoza, describes a simple and very selective method for the separation of C70 and higher fullerenes from mixtures with C60 by solid-liquid extraction with a receptor that forms a dimeric capsule, based on hydrogen bonds, around the selected fullerene, causing its solubilization in tetrahydrofuran. Addition of a few drops of acid causes dissociation of the capsule and the release of the fullerene by precipitation, allowing recycling of the capsule without any need of chromatography tools nor tedious separation procedures. The method has been patented in the United States by our Institute. The potential application of the method at the industrial level would ensure the commercial availability of higher fullerenes and would facilitate the discovery of future applications of those materials.

In the article Inclusion of cavitands and calix[4]arenes into a metallobridged para-(1H-imidazo[4,5-f][3,8]phenanthrolin-2-yl)-expanded calix[4]arene (Angew. Chem. Int. Ed. 2007, 46, 198-201), by Dr. Enrique Botana, Dr. Eric Da Silva, Dr. Jordi Benet-Buchholz, Prof. Pablo Ballester and Prof. Javier de Mendoza, a pyramidal metallo-cavitand of nanoscopic dimensions is reported. The compound, which contains four rhenium atoms located at the corners, can hold inside smaller calix[4]arenes and cavitands, due to their complementarity in shape and size. Like a hunter hunted, the calixarene, a typical receptor of supramolecular chemistry, is caught by a larger receptor. The article has been selected by the editors to illustrate the Cover of this special issue of Angewandte Chemie, a distinction that for the first time is awarded to our Institute. 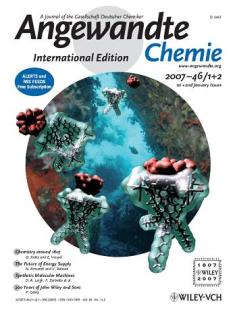 Previous
Prof. Antonio M. Echavarren is nominated the 2006 Liebig Lecturer
Next
Members of the ICIQ’s staff are awarded with the “Torres Quevedo” grants
This website uses cookies to facilitate user navigation. You can get more information or change the settings of your browser by clicking here. ACEPTAR