Despite Cp*Co(III) catalysts have emerged as a very attractive alternative to noble transition metals for the construction of heterocyclic scaffolds via C-H activation, the structure of the reactive species remains uncertain. Herein, we report the identification and unambiguous characterization of two long-sought cyclometalated Cp*Co(III) complexes which have been proposed as key intermediates in C-H functionalization reactions. The addition of MeCN as a stabilizing ligand plays a crucial role, allowing the access to otherwise highly reactive species. Mechanistic investigations demonstrate the intermediacy of these species in oxidative annulations with alkynes, including the direct observation, under catalytic conditions, of a previously elusive post-migratory insertion seven-membered cobaltacycle. 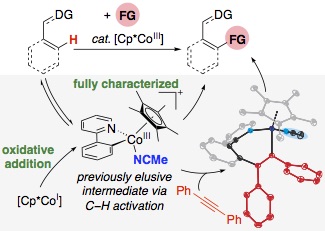