N-doped carbon (N–C) materials are increasingly popular in different electrochemical and catalytic applications. Due to the structural and stoichiometric diversity of these materials, however, the role of different functional moieties is still controversial. We have synthesized a set of N–C catalysts, with identical morphologies (∼27 nm pore size). By systematically changing the precursors, we have varied the amount and chemical nature of N-functions on the catalyst surface. The CO2 reduction (CO2R) properties of these catalysts were tested in both electrochemical (EC) and thermal catalytic (TC) experiments (i.e., CO2 + H2 reaction). CO was the major CO2R product in all cases, while CH4 appeared as a minor product. Importantly, the CO2R activity changed with the chemical composition, and the activity trend was similar in the EC and TC scenarios. The activity was correlated with the amount of different N-functions, and a correlation was found for the −NOx species. Interestingly, the amount of this species decreased radically during EC CO2R, which was coupled with the performance decrease. The observations were rationalized by the adsorption/desorption properties of the samples, while theoretical insights indicated a similarity between the EC and TC paths. 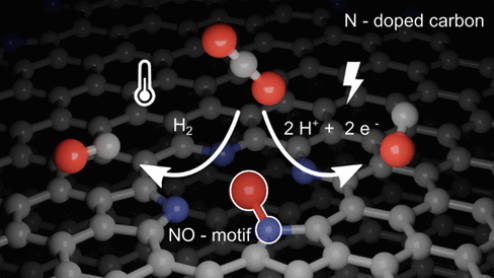