Two imidazolate-based Co-MOFs, IFP-5 and IFP-8 (Imidazolate Framework Potsdam), with different peripheral group -R (-Me and -OMe, respectively) have been synthesized by a solvothermal method and tested toward oxygen evolution reaction (OER). Remarkably, IFP-8 presents much lower overpotentials (319 mV at 10 mA/cm2, and 490 mV at 500 mA/cm2) respect IFP-5 toward OER, as confirmed by on-line gas chromatography measurements (Faradaic yield of O2 > 99%). Moreover, the system is extraordinary stable during 120 h, even when used as a catalyst toward overall water splitting reaction without any sign of fatigue. An integrated ex-situ spectroscopic study, based on PXRD, EXAFS, and ATR, allows the identification of the active species and the factors that rule the catalytic activity. Indeed, it was found that the performances are highly affected by the nature of the -R group, because this small change strongly influences the conversion of the initial metal-organic framework (MOF) to the active species. As a consequence, the remarkable activity of IFP-8 can be ascribed to the formation of Co(O)OH phase of few nanometers particle size (3-10 nm) during the electrocatalytic oxygen evolution. 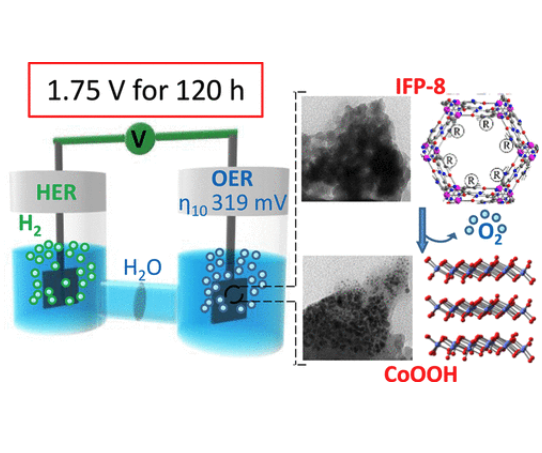