Oxygen-containing mononuclear ruthenium species such as ruthenium(III)-hydroxo, ruthenium(IV)-oxo, ruthenium(V)-oxo and ruthenium(IV)-peroxo are invoked as key intermediates in O-O bond formation during Ru catalyzed water oxidation. However, the extreme instability of these species, as a result of the high oxidation states of Ru, makes their isolation and study quite challenging. In particular, the nature of the putative peroxo species has been a topic of debate in the last decades and still remains unclear. Herein we report the isolation and full spectroscopic as well as crystallographic characterization of a Ru(IV) side-on peroxo complex, a key missing link after the rate-determining O-O bond formation. Experimental data coupled with theoretical calculations point to a peroxo moiety symmetrically coordinated to the Ru atom leading to a closed shell electronic structure for h2-[RuIV-OO]2+. Labeling studies evidence the direct evolution of O2 from the nucleophilic attack of a H2O molecule to the highly electrophilic Ru=O species via the formation of the h2-[RuIV-OO]2+ intermediate. 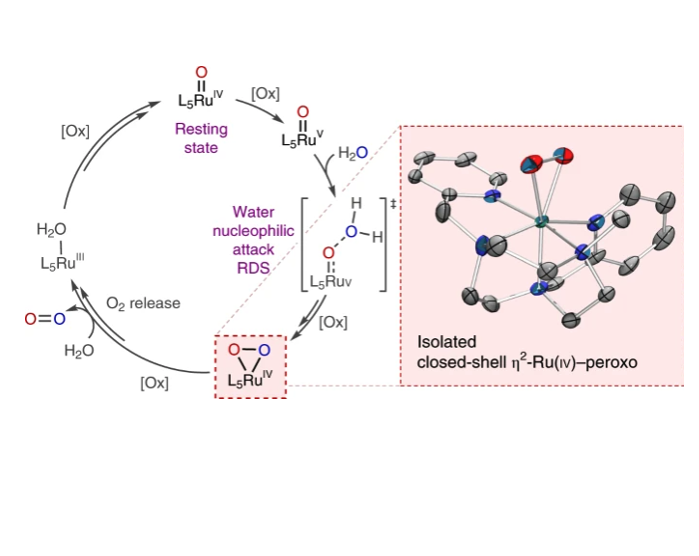