We report a catalytic asymmetric protocol for the preparation of chiral pyrrolidinones proceeding via a radical pathway. The chemistry exploits the combination of photoredox catalysis and Lewis base catalysis to realise the first example of asymmetric radical conjugate addition to α,β-unsaturated anhydrides and esters. The reaction is initiated by photoredox activation of N-arylglycines to generate, upon decarboxylation, α-amino radicals. These radicals are then intercepted stereoselectively by α,β-unsaturated acyl ammonium intermediates, whose formation is mastered by a chiral isothiourea organocatalyst. Cyclisation leads to catalyst turnover and formation of enantioenriched pyrrolidinones. The utility of the protocol was demonstrated with application to the synthesis of biologically-active γ-amino butyric acids. 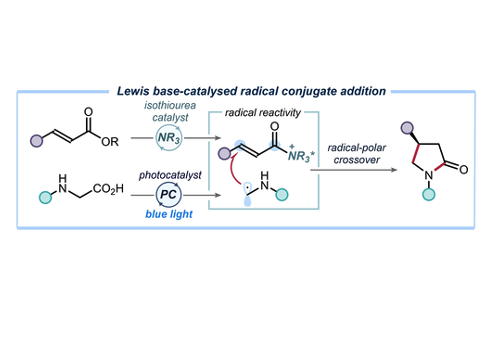