The oxygen evolution reaction (OER) is limited by the inherent linear scaling relationships of its reaction intermediates. Manipulating the spin configuration of the water oxidation intermediates allows us to overcome these constraints. Cobalt hexacyanoferrate (CoFe–PB) is an efficient and robust water oxidation catalyst and further known as a magnetic switch. Its versatile electronic structure renders it a potential candidate for magnetic tuning of the OER. Herein, we used first-principles density functional theory calculations to describe the OER on two different CoFe–PB model systems and evaluated the possibility for spin-crossover (SCO) of their resting states. We show that SCO during OER can significantly lower the overpotential by 0.7 V, leading to an overpotential of around 0.3 V, which is in agreement with the experimentally measured value. Applying an external potential >1.5 V vs SHE, the SCO-assisted pathway becomes largely favored and most likely the predominant reaction pathway. 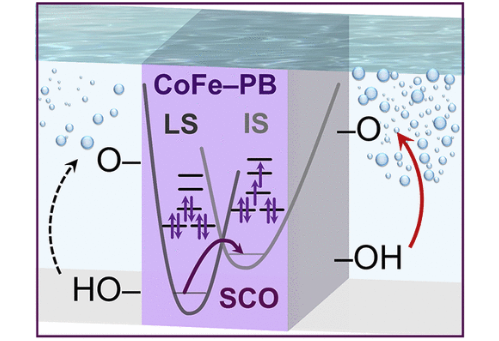