Since the seminal works on the application of density functional theory and the computational hydrogen electrode to electrochemical CO2 reduction (eCO2R) and hydrogen evolution (HER), the modeling of both reactions has quickly evolved for the last two decades. Formulation of thermodynamic and kinetic linear scaling relationships for key intermediates on crystalline materials have led to the definition of activity volcano plots, overpotential diagrams, and full exploitation of these theoretical outcomes at laboratory scale. However, recent studies hint at the role of morphological changes and short-lived intermediates in ruling the catalytic performance under operating conditions, further raising the bar for the modeling of electrocatalytic systems. Here, we highlight some novel methodological approaches employed to address eCO2R and HER reactions. Moving from the atomic scale to the bulk electrolyte, we first show how ab initio and machine learning methodologies can partially reproduce surface reconstruction under operation, thus identifying active sites and reaction mechanisms if coupled with microkinetic modeling. Later, we introduce the potential of density functional theory and machine learning to interpret data from Operando spectroelectrochemical techniques, such as Raman spectroscopy and extended X-ray absorption fine structure characterization. Next, we review the role of electrolyte and mass transport effects. Finally, we suggest further challenges for computational modeling in the near future as well as our perspective on the directions to follow. 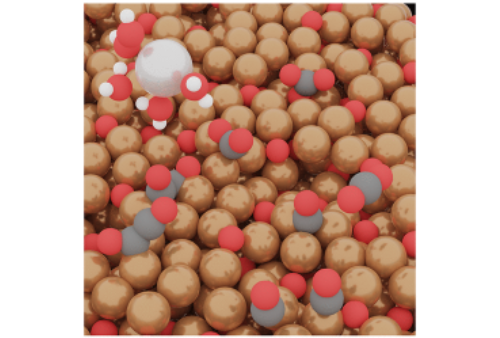