Molecular recognition in water using macrocyclic synthetic receptors constitutes a vibrant and timely research area of supramolecular chemistry. Pioneering examples on the topic date back to the 1980s. The investigated model systems and the results derived from them are key for furthering our understanding of the remarkable properties exhibited by proteins: high binding affinity, superior binding selectivity, and extreme catalytic performance. Dissecting the different effects contributing to the proteins’ properties is severely limited owing to its complex nature. Molecular recognition in water is also involved in other appreciated areas such as self-assembly, drug discovery, and supramolecular catalysis. The development of all these research areas entails a deep understanding of the molecular recognition events occurring in aqueous media. In this review, we cover the past three decades of molecular recognition studies of neutral and charged, polar and nonpolar organic substrates and ions using selected artificial receptors soluble in water. We briefly discuss the intermolecular forces involved in the reversible binding of the substrates, as well as the hydrophobic and Hofmeister effects operating in aqueous solution. We examine, from an interdisciplinary perspective, the design and development of effective water-soluble synthetic receptors based on cyclic, oligo-cyclic, and concave-shaped architectures. We also include selected examples of self-assembled water-soluble synthetic receptors. The catalytic performance of some of the presented receptors is also described. The latter process also deals with molecular recognition and energetic stabilization, but instead of binding ground-state species, the targets become elusive counterparts: transition states and other high-energy intermediates. 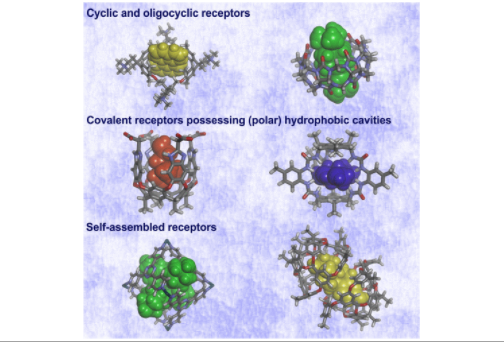