The ubiquity and importance of carboxylic acids and amides in peptides, pharmaceuticals, agrochemicals, and synthetic materials has challenged chemists to design de novo catalytic carboxylation and amidation protocols. They represent a powerful alternative to canonical oxidation of alcohols and aldehydes, hydrolysis of nitriles, transamidation reactions, or condensation techniques for the synthesis of these functional groups. Among various scenarios, the recent years have witnessed considerable advances in Ni-catalyzed reductive carboxylation and amidation reactions utilizing carbon dioxide and isocyanate counterparts. This Account aims to highlight the progress made in this arena with a historical perspective, with particular emphasis on the methodologies that have emanated from our laboratories without losing sight of the underlying principles by which these reactions operate, with the ultimate goal of allowing the transition from comprehension to prediction in this exciting field.

Unlike the utilization of conventional polar yet highly reactive organometallic reagents in carboxylation or amidation reactions, the utilization of nickel catalysts has allowed the use of carbon dioxide and isocyanates with less reactive and less-polarized counterparts for the formations of carboxylic acids and amides. These less reactive groups include organic halides and pseudohalides (i.e., alkyl bromides and chlorides, esters, alcohols, and ammonium salts), unsaturated hydrocarbons (i.e., alkynes, styrenes, unactivated alkenes, and dienes) or even C–H bonds, where forging the targeted C–C bond at previously unfunctionalized C–H linkages was possible, thus giving access to densely functionalized compounds that would be difficult to access otherwise. The C–H functionalization includes chain-walking scenarios, where subtle changes in the ligand and reaction conditions marked the selectivity of the transformations, and reactions via a [1,4]-Ni shift, where selective carboxylation in aromatic rings could be achieved. Conceptuality and practicality aside, these transformations have even offered the possibility of modulating and dictating the site-selectivity pattern, thus providing not only new vistas when controlling the selectivity of bond-forming reactions at specific sites within the side chain but also new knowledge in retrosynthetic analysis when accessing carboxylic acids and amide backbones. Importantly, these techniques have shown to be particularly suited for the preparation of isotopically labeled molecules when using 13CO2 or even 14CO2, thus becoming a useful endeavor in the drug discovery pipeline. Although mechanistic understanding at the molecular level still constitutes the “Achilles heel” of these transformations, the recent empirical discoveries and the rapid adoption of these protocols by the community augurs well for the widespread utilization of reductive carboxylation and amidation reactions in both academic and industrial laboratories. 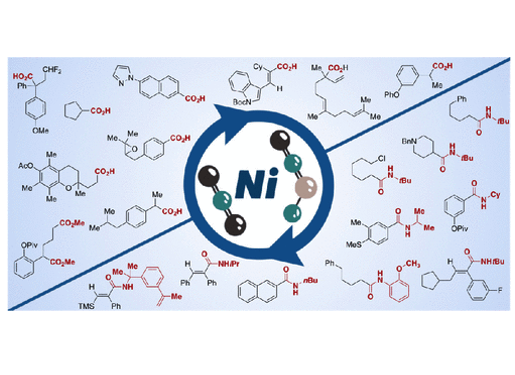