We report a radical-based organocatalytic method for the direct benzylation of allylic C–H bonds. The process uses nonfunctionalized allylic substrates and readily available benzyl radical precursors and is driven by visible light. Crucial was the identification of a dithiophosphoric acid that performs two distinct catalytic roles, sequentially acting as a catalytic donor for the formation of photoactive electron donor–acceptor (EDA) complexes and then as a hydrogen atom abstractor. By mastering these orthogonal radical generation paths, the organic catalyst enables the formation of benzylic and allylic radicals, respectively, to then govern their selective coupling. The protocol was also used to design a three-component radical process, which increased the synthetic potential of the chemistry. 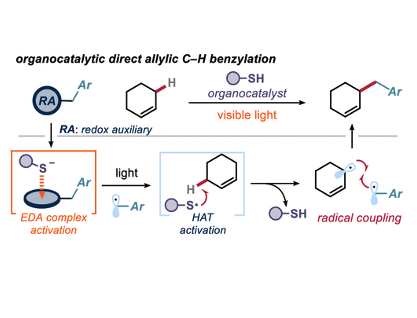