The photophysical properties of a Keggin-type polyoxometalate (POM) covalently bounded to a benzospiropyran (BSPR) unit have been investigated. These studies reveal that both closed and open forms are emissive with distinct spectral features (λem (closed form) = 530 nm, λem (open form) = 670 nm) and that the fluorescence of the BSPR unit of the hybrid is considerably enhanced compared to BSPR parent compounds. While the fluorescence excitation energy of the BSPR reference compounds (370 nm) is close to the intense absorption responsible of the photochromic character (350 nm), the fluorescence excitation of the hybrid is shifted to lower energy (400 nm), improving the population of the emissive state. Combined NOESY NMR and theoretical calculations of the closed form of the hybrid give an intimate understanding of the conformation adopted by the hybrid and show that the nitroaryl moieties of the BSPR is folded toward the POM, which should affect the electronic properties of the BSPR. 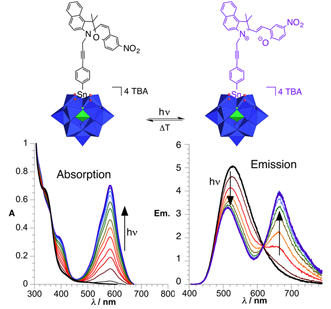