By means of density functional calculations, we perform a mechanistic analysis of the Huisgen cycloaddition reaction taking place with the chemical involvement of the {Mo132} nanocapsule, initially reported by Besson and others [Dalton Trans. 2012, 41, 9852–9854], whereby a 2:1 regioselectivity is obtained by chemically grafting the reactants onto the cavity walls of this metal‐oxide catalyst. We explore the mechanistic pathways quantitatively and explore the basis of this regioselectivity. When propiolate is coordinated to the nanocapsule, the selectivity of the catalytic system is both kinetically and thermodynamically in favour of the formation of 1,4‐triazole, whereas in the alternative pathway, which begins with the triazidoacetate coordination, the selectivity is kinetic alone. The former and latter pathways have activation barrier differences between each isomer of 29.9 kJ/mol and 39.2 kJ/mol, respectively. 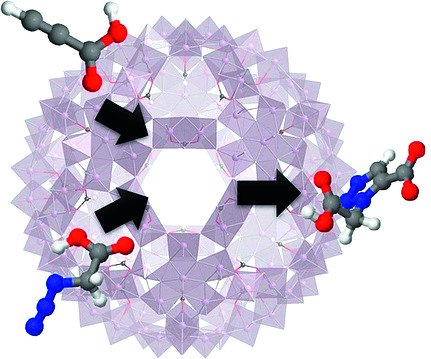