Alkynylcyclopropanes have found promising applications in both organic synthesis and medicinal chemistry but remain rather underexplored due to the challenges associated with their preparation. We describe a convenient two-step methodology for the alkynylcyclopropanation of alkenes, based on the rhodium(II)-catalyzed decarbenation of 7-alkynyl cycloheptatrienes. The catalytic system employed circumvents a fundamental problem associated with these substrates, which usually evolve via 6-endo-dig cyclization or ring-contraction pathways under metal catalysis. This unique performance unlocks a rapid access to a diverse library of alkynylcyclopropanes (including derivatives of complex drug-like molecules), versatile intermediates that previously required much lengthier synthetic approaches. Combining experiments and DFT calculations, the complete mechanistic picture for the divergent reactivity of alkynylcycloheptatrienes under metal catalysis has been unveiled, rationalizing the unique selectivity displayed by rhodium(II) complexes. 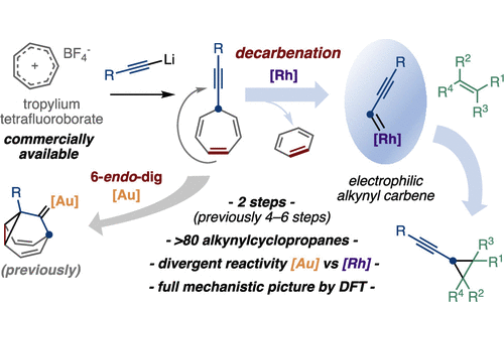